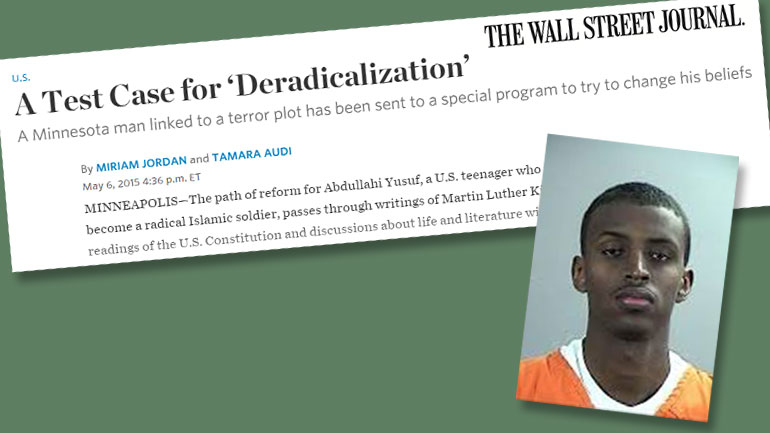 A terror deradicalization program — established in the “Ground Zero” of terror recruitment, Minnesota’s Twin Cities — has already failed after just a few months.

The program was established after a federal court released 19-year-old terror suspect Abdullahi Yusuf to a halfway house earlier this year. Federal prosecutors opposed Yusuf’s release, but were overruled by the federal judge in the case, Michael J. Davis, the Chief Judge of the District of Minnesota. Today, Yusuf again sits in jail, having violated the terms of his release.

Remarkably, Judge Davis said today in a separate case of six men charged with trying to join the Islamic State that he would be willing to consider “less restrictive options” than detaining the men – just a day after Yusuf’s re-arrest.

Last May, Yusuf was arrested at the Minneapolis airport while on his way to Syria by way of Turkey to join the Islamic State. One of his accomplices, Abdi Nur, did make it to Syria, and he now serves as an effective recruiter for the terror group.

Just last week, the Wall Street Journal reported on the program with an article titled “A Test Case for ‘Deradicalization’“

The path of reform for Abdullahi Yusuf, a U.S. teenager who tried to become a radical Islamic soldier, passes through writings of Martin Luther King Jr., readings of the U.S. Constitution and discussions about life and literature with a fellow Somali-American named Ahmed Amin.

Mr. Yusuf’s attempt to travel to the Middle East last year helped lead authorities to six Minnesota men who were charged last month in connection with a plan to join Islamic State abroad. The 19-year-old has become a test case for whether Americans lured by Islamic extremism can be deradicalized.

A Minnesota judge earlier this year sent Mr. Yusuf to a halfway house, where he adheres to a tailor-made curriculum aimed at reintegrating him into American society and his immigrant community here. If the program succeeds, Mr. Yusuf’s sentence could be reduced — and the approach to his deradicalization replicated, experts say.

Counterterrorism experts believe it is the first such effort in the U.S. to try to turn a young person connected to a terror prosecution away from an extremist Islamist ideology since the advent of groups like al-Shabaab and Islamic State, or ISIS.

Abdullahi Yusuf, a Somali-American who pleaded guilty to conspiring to support terrorists in the Middle East, has been taken into custody for allegedly violating conditions while living in a St. Paul halfway house, according to court documents filed Monday. . . .  (read the rest)