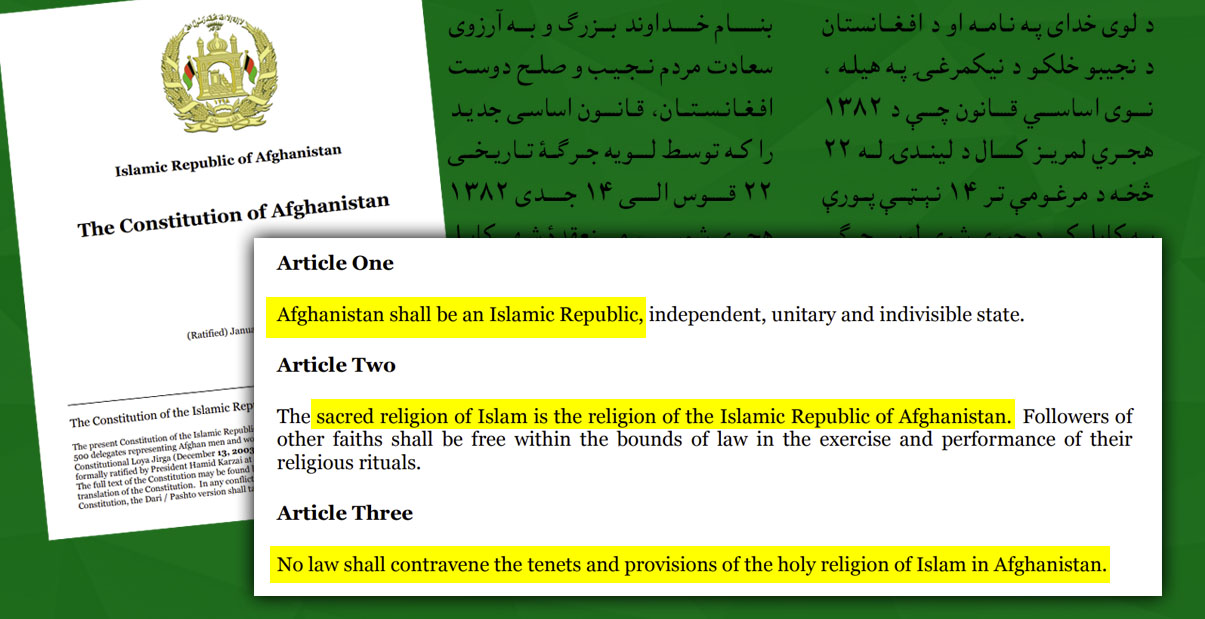 The following was written on 6 January 2004 by Stephen Coughlin when he was working at the National Military Command Center while also a student at the Joint Military Intelligence College (known today as the National Intelligence University):

The Taliban Proxies will simply apply the plain meaning of supremacy clause. It nullifies the Constitution. As such, the Constitution was drafted in a manner that envisions a governing authority committed to the strict application of Islamic law along the lines expressed by the Taliban and al-Qaida. This is assured by the fact that Chapter 1, Article 1 declares Afghanistan to be an Islamic Republic.

For this assessment, the relevant law is Chapter 1, Articles 2 & 3 of the Constitution. The discussion will be used to demonstrate how the free exercise of religion will cascade into loss of citizenship and unequal protection under the law – as the law of the land as stated in the Afghan Constitution. The two articles state:

Chapter I, Article 2:  The religion of the state of the Islamic Republic of Afghanistan is the sacred religion of Islam. Followers of other religions are free to exercise their faith and perform their religious rites within the limits of the provisions of the law.

Chapter I, Article 3:  In Afghanistan, no law can be contrary to the beliefs and provisions of the sacred religion of Islam.

The person in the Afghan government serving as a Taliban Proxy will argue that if Article 3 is to have any meaning, then certainly it must mean that the laws of Afghanistan, including the Constitution itself, must conform to Islamic law – the Shari’a. The issue will come down to control of the meaning of the term “provisions” as stated in Article 3. The argument is one of definition.  What else could Article 3 mean when it says “no law can be contrary to the beliefs and provisions of the sacred religion of Islam” if not that the provisions in question are the clearly stated black letter of Islamic law? In making this argument, the Taliban Proxy’s position will be both credible and persuasive.

Most likely, the question of definition relating to Article 3 will not be made in isolation but rather in conjunction with some substantive issue from other portions of the Constitution. The following scenario will serve to explain the implications of the Article 2, which clearly seems to grant “free exercise of religion,” when interpreted in light of Article 3.

A group of non-Muslims (or even Shia Muslims) begin to exercise the free expression of their religion as provided in Article 2: “Followers of other religions are free to exercise their faith and perform their religious rites.” The non-Muslim might argue that Article 2 couldn’t be any clearer. To the non-Muslim’s initial surprise, the Taliban Proxy earnestly agrees that the language could not be any clearer. The same article that offers free exercise of religion to other faiths, he would point out, also states explicitly that Afghanistan is an Islamic Republic and that the free exercise of non-Muslim religions is free only in-so-far as they are consistent with the proper running of an Islamic Republic. Article 2, he notes, states that free exercise of non-Muslim religions is guaranteed only in-so-far as they stay “within the limits of the provisions of the law.”

Most seriously, the Taliban Proxy will tell the non-Muslim that Afghan law will allow non-Muslim believers to freely practice their religion as long as their religious practices conform to Islamic law on such matters and then point out how tolerant Islam is in this regard. Surprised by what seems, on first impression, to be such a silly answer from what appears to be such a serious man, the non-Muslim will argue that whatever Afghan law stands for, it certainly couldn’t stand for the imposition of Islamic law in this instance as it seems to run contrary to the clear expression of the rights of non-Muslims to freely express their religious beliefs as stated in Article 2.

The Taliban Proxy would correctly point out that there is nothing contradictory to using Shari’a to establish the “limits of the provisions of that law” as it was clearly envisioned that Islamic law be given full effect in situations just like this. With a cynical guffaw, the non-Muslim will protest that such an outcome was never envisioned by the drafters of the Constitution and that the Taliban Proxy’s analysis is the result of self-serving extremist casuistry that cannot possibly stand up to even minimal scrutiny.

With a glimmer of victory in his eyes, the Taliban Proxy will point out that his position is manifestly clear and based on a straight-line interpretation of the Constitution using the most rudimentary concepts of statutory construction. Noting that Article 2 does is not clear on its own, he will point out that it is meant to be read in conjunction with Article 3 that states that “no law can be contrary to the beliefs and provisions of the sacred religion of Islam.“ With this analysis, the Taliban Proxy will then connect the dots – apply the law – to demonstrate that not only should Article 2 be interpreted to mean that free exercise of religion is controlled by specific Islamic law on the subject, but that it is actually intended to be the law in this situation precisely because there is specific Islamic law on point. The Taliban Proxy’s argument is both persuasive and correct.

Beginning to suspect their own vulnerability, the non-Muslims begin to ruminate about how this affects their right to express their religion in Afghanistan. The Taliban Proxy simply points out that if they were Muslim, they could take their claim to an Islamic court, but because they are non-Muslims, they cannot serve as witnesses or provide testimony in their own proceeding (Shari’a o24.2 (e)). Further, non-Muslims serving in government positions may find their positions challenged as it is arguably against Islamic law to place non-Muslims in positions of authority over Muslims or even in positions of authority over other non-Muslims in an Islamic state. (Shari’a 25.3(a)).

The Taliban Proxy would note that their situation is not all bad. Islam is generous and freely tolerates the expression of their religion so long as they submit to the laws of Islam and pay the Jizyah – or submission tax, are not idol worshippers or people of a Book that came after Mohammed, wear distinctive cloths that identify them as non-Muslims, stay on the sides of the street, never practice their religion openly, never live in a house larger than a Muslim’s, never build new churches, and never ever attempt to lead a Muslim from Islam. (Shari’a o11)

The non-Muslim will note in exasperation that if he cannot lead his life the same as a similarly situated Muslim, cannot offer testimony, and cannot have authority over others – then he not only is not allowed the commonly understood right to free exercise of his religion but arguably doesn’t even have the same rights as his Muslim peers as citizens. The Taliban Proxy would note that while this may be true, he should not worry because as a non-Muslim operating under the conditions outlined in the Shari’a, he will be given the full protection that the Islamic Republic accords non-Muslims – or at least the level of protection given to other non-Muslims similarly situated. The Taliban Proxy would then insist that non-Muslims not direct their anger and frustration at him but rather at the U.S. State Department because they were the primary drafters of the Constitution.

The scenario raises a series of concerns:

The risk associated with the constitutional language that formally subordinates the democratic principals of the Afghan Constitution to Islamic law is real and assured to manifest itself.

Reliance of the Traveller:  A Classic Manual of Islamic Sacred Law
By Ahmad ibn Naqib al-Misri

o11.1  A formal agreement of protection is made with citizens who are:

the other prophets (upon whom be blessings and peace).

o11.2  Such an agreement may not be effected with those who are idol worshippers (dis: o9.9(n:)), or those who do not have a Sacred Book or something that could have been a Book.

(A:  Something that could have been a Book refers to those like the Zoroastians, who have remnants resembling an ancient Book.  As for the psuedoscriptures of could that have appeared since Islam (n:  such as the Sikhs, Baha’is, Mormons, Qadianis, etc.), they neither are nor could be a Book, since the Koran is the final revelation (dis: w4).)

o11.3  Such an agreement is only valid when the subject peoples:

(a)        follow the rules of Islam (A: those mentioned below (o11.5) and those involving public behavior and dress, thought in acts of worship and their private lives, the subject communities have their own laws, judges, and courts, enforcing the rules of their own religion among themselves);

o11.4  The minimum non-Muslim poll tax is one dinar (n: 4.235 grams of gold) per person (A: per year).  The maximum is whatever both sides agree upon. It is collected with leniency and politeness, as are all debts, and is not levied on women, children or the insane.

o11.5  Such non-Muslim subjects are obliged to comply with the Islamic rules that pertain to safety and indemnity of life, reputation, and property.  In addition, they:

o11.6  They are forbidden to reside in the Hijaz, meaning the area and towns around Mecca, Medina, and Yamama, for more than three days (when the caliph allows them to enter there of something they need).

o11.9  If non-Muslim subjects of the Islamic stat refuse to conform to the rules of Islam, or to pay the non-Muslim poll tax, then their agreement with the state has been violated (dis: 011.11)(A: though if only one of them disobeys, it concerns him alone).

o11.11  When a subject’s agreement with the state has been violated, the caliph chooses between the four alternatives mentioned above in connection with prisoners of war (o9.14).

THE QUALIFICATIONS OF A CALIPH

o25.3  (Nawawi:)  Among the qualifications of the caliph are that he be:

(a)  Muslim (H: so that he may see to the best interests of Islam and the Muslims (K: it being invalid to appoint a non-Muslim (kafir) to authority, even to rule non-Muslims.)  (S:  Qadi ‘Iyad states that there is scholarly consensus (def: b7) that is is not legally valid to invest a non-Muslim as caliph, and that if a caliph becomes a non- Muslim (dis: o8.7) he is no longer caliph, as also when he does not maintain the

o24.2  Legal testimony is only acceptable from a witness who:

and unbelief is the vilest form of corruption, as goes without saying);

The Constitution of Afghanistan (ratified January 26, 2004)

Archbishop Viganò: We are faced with a colossal deception, based on lies and fraud
September 3, 2021
Search