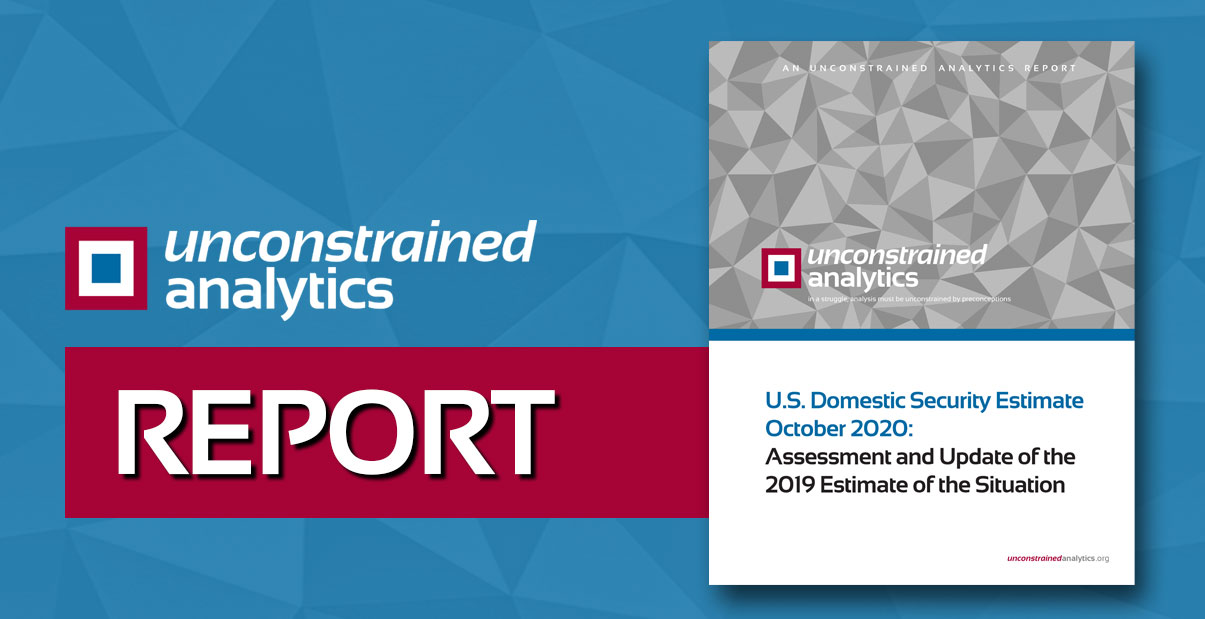 This U.S Domestic Security Estimate, October 2020 will assess and update the 2019 Estimate. Strategy & Tactics defined the American left in Marxist terms, explained that it operates along Maoist Political Warfare lines, and warned of its building capacity to execute classic mass line attacks to attack citizens and destroy America. This assessment validates the original estimate. The same events that validated the original estimate also demand that it be updated. What was written as warning is now a crisis. Leading into the 2020 year, from:

—The Republican leadership legitimized by acceptance the star chamber tactics the Democratic Party used as the process for undertaking formal impeachment proceedings signaling its full cooptation by Marxist narratives at the expense of Constitutional principles and the rule of law;

—To the imposition of rehearsed mass line enforcement narratives – under cover of protecting the population from an epidemic based on failed epidemiological models, leading to the suspension of citizens’ Constitutional, due process and economic rights;

—The suppression of high-value American doctrines on protected speech whenever that speech violates internationally enforced speech cannons influenced by international organizations under Marxist influence and leadership;

—That set the conditions for coordinated and broadly deployed mass line attacks directed at citizens and property;

—Facilitated by the political leadership, in both parties, either by acts of commission or omission that allow it to sustain. Most of the events we see today were foreseeable and foreseen. For example;

—As part of the July 2019 update, Strategy & Tactics  added the textbox “A Political Warfare Template to Understanding Current Events”, warning that Democratic leaders engaging in Marxist revolutionary rhetoric would force them into engaging in revolutionary behavior at some later point in time. With candidate Biden dabbling in the rhetoric of revolution with comments like, “let’s start a real physical revolution,” the Democratic party leadership institutionalized the revolutionary rhetoric signaling the escalation of language that leads to escalation of violence. The violence ensued. The abuse of language then resulted in the abuse of power today.

—In November 2019, Warning on Racism opened with the warning: “There are indicators that the Left will initiate a strategic information effort leveraging the full range of political warfare activities to delegitimize the United States. The effort will pivot off the upcoming election cycle and include intimidation and violence.”

—Alarmed by the actions taken under color of protecting the population from the COVID19 epidemic in March 2020, UA, Inc released “Formation of a COVID19 Red Team” and “Narrative Dominance in COVID19 Reporting.” UA Inc raised concerns that actions and narratives associated with C19 restrictions were severable from C19 and should be assessed that way. Of paramount concern, UA Inc pointed out that the “dominant narrative” on C19 follows mass line enforcement tendencies; that social media continues to enforce United Nations and WHO speech standards hostile to American protected speech doctrines; and that the UN and WHO are led by Marxists.

—In early May 2020, “McChrystal, Information Warfare and Trump” called out a former SOCOM Commander for using actual Information Warfare trade-craft to undermine a serving president. McCrystal’s activities reflect a disturbing pattern in which retired senior generals leverage their military expertise in the domestic political arena.

—In later May, “Requiem for Minnesota – When a State becomes a Counter-State” was socialized as the Floyd incident occurred in Minneapolis. Using political warfare metrics, Requiem explained why the Left’s escalation to violence would begin in Minnesota and warned of its immanence.

—The fit between the political warfare perspectives used to assess current events and their ongoing ability to sustain accurate predictive forecasting validates the process. It also explains the necessity of updating the original Estimate to reflect today’s realities moving forward.

—The situation is concerning. Concerns regarding C19 actions and narratives have borne out. C19 narratives have proven to be arbitrary, extra-legal, and imposed by fiat on the American people. By design, they continue to suppress freedoms, liberties and the rule of law. Within the envelope created by C19 narratives, mass line violence was unleashed on the American public along the lines forecast. Physically isolated, the targeted public was prevented from sharing their skepticism and disbelief about the appropriateness of the measures imposed on them. Therefore, beyond physical isolation, they were alone and isolated in their thinking which resulted in the inability to publicly question and oppose what was being done to them in the name of public health. In that same period, the BLM/Antifa base, was supercharged and prepared.

—Pivoting off Floyd’s death, BLM and Antifa launched a classic mass line attack that staggered the country using a weaponized variation of the Marxist “Intersectionality” [Watch UA video on this] narrative fronted by BLM. Within days of Floyd’s death, large scale Floyd-designated riots materialized, but not just in Minneapolis, but also in Washington, DC, New York City, and even London, Berlin, and Sidney among others. This suggests international level synchronization and command and control which also suggests unified operational planning and execution from local, to national, to international.

—Omission – The Dogs that Don’t Bark. Among the elements of political warfare enumerated in Strategy & Tactics is the role establishment Republicans play in the context of a controlled opposition. Silence in the face of C19 restrictions – even when those restrictions fail to demonstrate a reasonable nexus to the epidemiological threat while at the same time effectively suppressing rights and freedoms remains an indicator – and a deep concern.

Even more concerning, however, is the Republican’s sustained silence in the face of organized mass line street violence. Whether it’s Senator Rubio adopting the “peaceful protest” narrative or the Heritage Foundation President conforming to the mass line narrative requirements, “racism in America is a fatal wound,” the political warfare effort proceeded with the assurance that it would face no real resistance from Republicans.

Actually, the Left was re-assured.  The initial indicator that Republicans would fold into mass line narratives was confirmed when they accepted the Democratic leadership’s jarringly extra-legal star chamber tactics to impeach the president.

The updated Estimate of the Situation reflects the changed realities of the Left successfully imposing its will on American institutions, governance, and the people.  It has successfully maneuvered this election cycle into a classic Marxist binary [watch UA video on this] that seeks the delegitimization and destruction of America. As Marxists would say, ‘America is a contradiction in need of resolution.’ Or, as Marcuse might say, ‘America is the negatively tolerant that must be negated by as many acts of liberating tolerance as it takes.