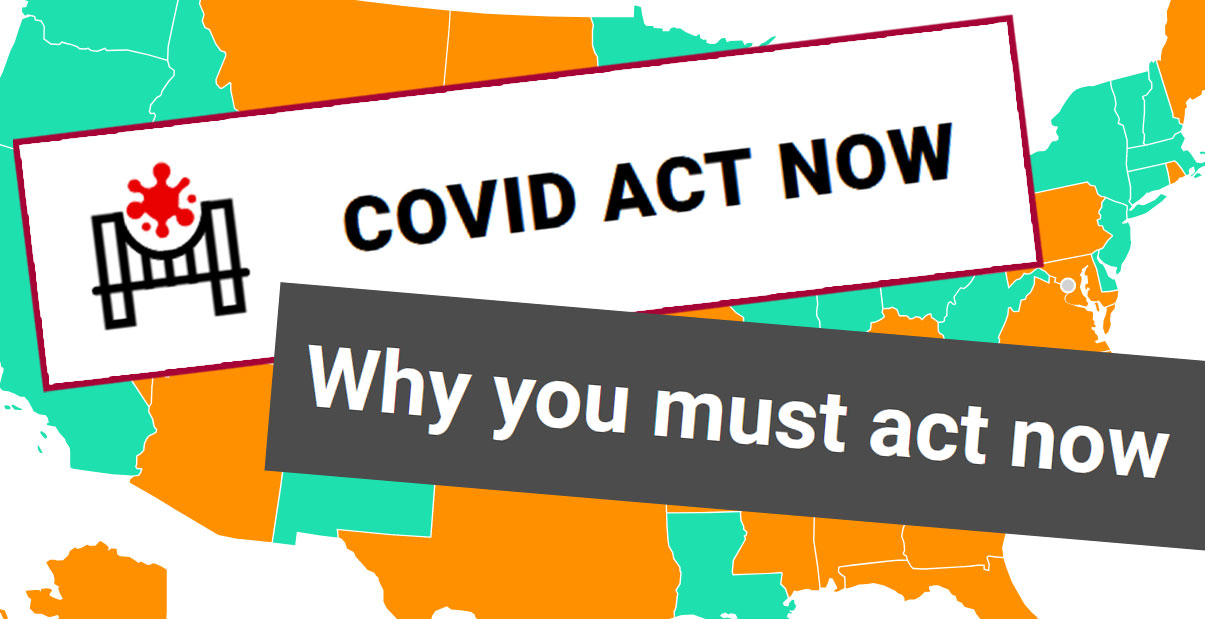 In late March, The Federalist Society put out “Inaccurate Virus Models are Panicking Officials into Ill-Advised Lockdowns” by Madeline Osburn.  The article raises questions about the nature and quality of the information relied on by government decision-makers and media when reporting on COVID-19. On the same day, The Federalist’s Twitter account was “temporarily locked for violating the Twitter Rules regarding COVID-19” in another  Federalist article.

Osburn’s concern was that the information used to drive decisions and inform the public was disproportionately coming from COVID Act Now, an organization whose very name signals a progressive posture. And progressive and techie it is. As Osborn notes,

Adding to Osburn, Alaska Congressman Jonathan Kreiss-Tompkins was the topic of Politico’s “How to Turn a Red State Purple.”

Igor Kofman’s Twitter puts him in the middle of the tech community.

Zack Rosen’s biographical sketch states that “Zack pioneered the first large-scale Drupal website for the Howard Dean campaign in 2003, which helped revolutionize the business model of politics from offline to the Internet.”

Even Georgetown’s Rebecca Katz was “a participant in the Initiative for U.S.-China Dialogue on Global Issues faculty research group on global health.”

Indeed, there is no doubt that key leaders of COVID Act Now are a part of the mobilized opposition to the current administration.

While COVID-19 is a serious threat to public health, the House’s recent activities demonstrate that political ideologies are cynically leveraging this crisis to accrue power. Citizens should be forewarned that power, once seized on any pretext, is rarely if ever, relinquished once a crisis has passed.

The model driving COVID Act Now was created by the Imperial College, London. That model has come under scrutiny for the Bayesian nature of the assumptions. These assumptions were employed to drive catastrophic projections leading to “point of no return” scenarios that evoke visions of Monty Python’s “bring out your dead.” This explains why COVID Act Now states, “this model is designed to drive fast action, not predict the future” on its panic-centric webpage “Coronavirus: Why You Must Act Now Reference/Assumptions.”

COVID Act Now’s statement could be paraphrased to read as “this projection is designed to panic a society into pre-scripted decision paths today before the science can be validated (or invalidated) tomorrow.” This scientized panic narrative remains among the more prominent tools in the Neo-Marxist toolbox.

In Re-Remembering the MisRemembered Left, Hegel’s “Science of Reason” was used to explain how ideologies are converted to sciences so that vanguards can enforce them against populations—for their own good, of course. Especially under progressive control, the all-powerful state, converts ideologies into enforceable sciences.

The Left has leveraged this time-honored tool since Marx conjured his scientific socialism. As with COVID-19, scientized ideological claims are often associated with actual scientific activities. Demands for dramatic intervention or immediate conformance are prime indicators that an ideology seeks enforcement through claims of scientific certainty. These demands are often based on unresolved “scientific” models that never convert over to reality.  These models depict “if we don’t act now” scenarios that warn that the sky will fall or we will hit “a point of no return,” or “the human race will face an extinction-level event.” The COVID Act Now’s narrative conforms to this pattern with precision.  (In Re-Remembering, see the section on Woodrow Wilson)

COVID Act Now’s role is to manipulate both public and governmental perceptions of the current pandemic to its “act now” ends. From the beginning, COVID-19 has been enveloped in a narrative arc that appears to have anticipated the virus while controlling its national conversation through the lifecycle of the COVID event to date. Thus, COVID Act Now should be viewed within a broader context.

At what point is it not only appropriate but necessary to ask who controls the dominant narrative on COVID-19 in America and the White House and, with it, the decision-making it is structured to facilitate?

Based on COVID Act Now activities, the above timeline, and TWITTER’s suppression of The Federalist articles questioning the established narrative,  it is reasonable to argue that the COVID-19 epidemic has been contained within a narrative arc that enforces pre-existing lines of effort in support of a pre-COVID-19 agenda.

Unaccountable, ideological, and unexpertized actors have managed to establish and enforce a bundle of dominant narratives in a period of crisis where, in a free society, the public has a right to know the full range of the crisis.

As it stands, there is a deliberate and wholesale exclusion of competing data, competing expert interpretations of data, opinions, and conclusions. This should violate public policy; it is certainly not in the public interest.

Social media abused its dominant position when blocking a competing conservative information provider. The lords of social media are promoting maximalist scenarios structured to position panicked populations to accept unparalleled expansions of state power. Thus, they undermine all efforts that do not advocate or imply maximalist statist outcomes, including those of the current administration.

For example, public health is among the police powers that belong to the state. Yet, as President Truman famously said, “The buck stops here!” Actually, allocating blame for a viral epidemic is like stopping the tide from coming in. Consider:

While the immediate issue confronting the United States is the COVID-19 epidemic, at some point, the chronic, pathological, institutionalized hatred of the current administration has to be incorporated into any balanced assessment. As ReRemembering the MisRemembered Left points out, what is popularly referred to as “biased reporting” by the “mainstream media (MSM),” a political warfare analysis identifies it as AGITPROP. Likewise, what is popularly labeled the “deep-state,” political warfare identifies as the Counter-State. The dominant COVID-19 narrative has taken on mass line characteristics.

A director general of the WHO rose to power as a leader in a murderous Marxist regime from a country in which he covered up epidemics and which is currently beholden to China.

Given the preceding information, a political warfare assessment of America in the COVID-19 crisis should sound an alarm.  Shrieking or otherwise, the alarm, as well as the assessment, should be mandatory. There is a difference between political opposition and the systematic undermining of an elected president in the execution of his enumerated Article II powers. There are consequences to obstructing a chief executive’s ability to govern. Consider:

Woe betide independent thinkers and journalists, government officials, healthcare professionals, and others who do not conform to the prescribed narrative. In that case, the enforcement narratives cascade to their secondary line of operation: delegitimization.

From the commanding heights of this dominant perch, national panic-pandemic narratives are crowding out competing credible epidemiological claims that are then under or partially reported, or not reported at all.

Examples of credible sources being crowded out include the life science and medical journal STAT that raised red flags over decisions based on the same questionable data driving COVID Act Now, Yale’s Prevention Research Center, Stanford’s Medical staff, MIT (even with political motivation caveats), and Germany’s elite Institute for Medical Microbiology at the Johannes Gutenberg University of Mainz. These expert voices should not have to compete with political activists from Silicon Valley.

This assessment does not take a position on which epidemiological opinions are correct. It simply points out that one side of the professional epidemiological debate is suppressed. Since two of the doctors followed up on their initial comments, they are provided below.