The Higgins Memo: A Deeper Dive 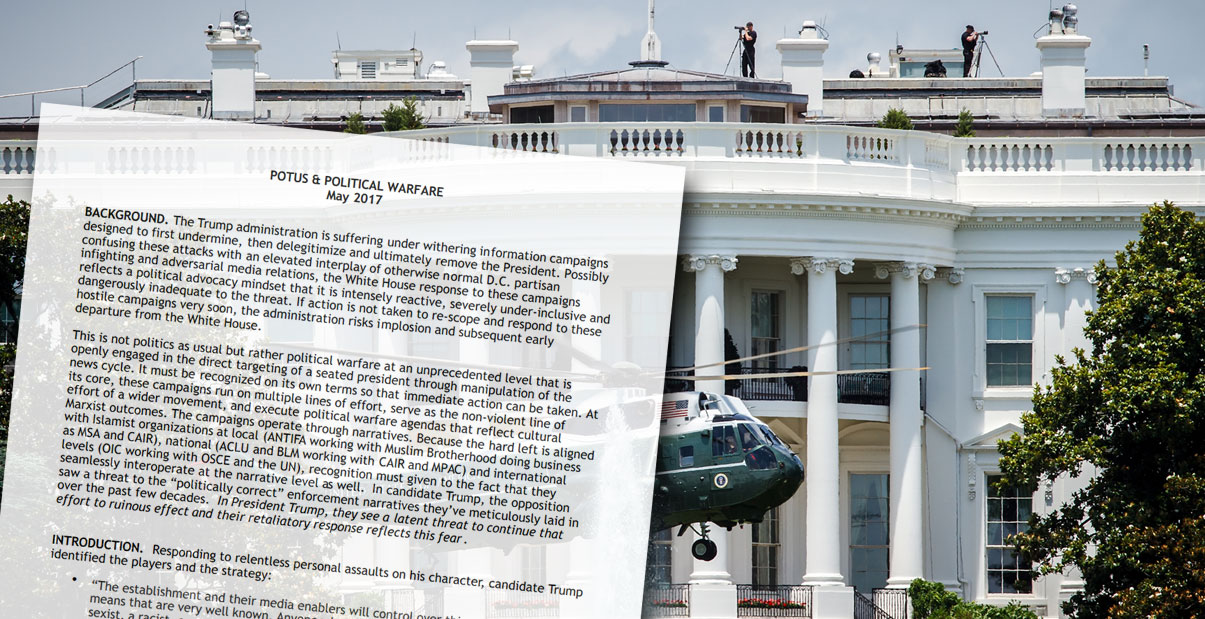 UA’s Rich Higgins was interviewed by LibertyNation about the “Higgins Memo” and they delved deeper into the contents and implications of this document with him :

The Higgins Memo should have been front page news across America, yet it was quietly swept under the rug and ignored by the majority of major media outlets. It detailed attempts by those within government to derail a presidential campaign and the efforts after they failed. After speaking with the author, Rich Higgins, regarding the Iran situation in an exclusive interview, Liberty Nation decided to delve deeper into the contents and implications of this document.

You can read the Higgins Memo in full on LN.

Liberty Nation: Could you give us an outline of what the memo actually contained?

Richard Higgins: What you see in the memo is the culmination of discussions I’ve been having with several individuals both within and outside of the administration, most of whom had participated directly or indirectly with the Trump campaign. And there was, I thought, a failure to appreciate the nature of the president’s election, and his de facto creation of this outside party. I always told people that he won the election at the first Republican debate where he basically refused to put his hand up and say he would support the Republican candidate.

At that point, he established himself as not part of the current two-party political system. I think where a lot of the analysis, even to this day, falls short of understanding that how the establishment political power structure views the president, including their international allies, was driving a lot of the early poor decision making in terms of some of personnel choices that were being made and other things.

I basically offered the memo with the thinking that the president needs to be made aware of this, that there are so many bad guys inside the system now. But I don’t know if I can give him this information without having it off-ramped and basically given the pocket veto by one of my superiors inside of the National Security Council apparatus, which is why it ended up going this outside pathway. I understood political warfare; I had run the Irregular Warfare Office at the Pentagon. I’d been working in this area for 20 something years. I underestimated the scope of what we were actually up against. You see in the memo structure itself some of what we thought was going on and most of it turns out to be true, but in fact the reality of the situation appears to have been far worse than we even lay out in the memo itself. . . . (read the rest of Part 1)

Liberty Nation: Correct me if I’m wrong here, but the word in the Swamp was that you were asking for the declassification of, is it called the Presidential Study Directive 11? Could you tell us exactly what that is and why it would be wise to declassify it?

Rich Higgins: The Presidential Study Directive 11 was the subject of rumors for a number of years around Washington for individuals who had been interested in the wider Islamic movement, particularly as it related to the Muslim Brotherhood and their designation as a terrorist entity or organization. So much of the counter-terror effort, going back to 9/11, almost 20 years ago, has been focused on the guys with the bombs and the guns. We never looked at their ideological infrastructure, their clandestine infrastructure, their financial infrastructure, to a level that I thought that it needed to be done.

As we in the counter-terrorism community watched in 2010 as the Arab Spring took root across the Middle East, most of the folks who really knew knew the terrorist issue were deeply concerned about the Muslim Brotherhood’s role in fomenting the entire operation from beginning to end. There was this idea that it was some sort of peace and love and freedom breaking out in the Middle East, which was to us who dealt with the subject matter complete and total nonsense. One only need to read Sayyid Qutb’s Milestones. In the book he talks about freedom and justice, and the Muslim Brotherhood slogan is freedom and justice. Here’s Al-Qaeda’s main ideological author, Sayyid Qutb, speaking about freedom and justice, and then you have the Muslim Brotherhood on the ground in the Arab Spring talking about freedom for justice.

Well, there was always a rumor about the fact that the Obama administration had somehow played a role in the Arab Spring. What was that role? People knew that there was an inter-agency task force dealing with the Middle East and all that sort of stuff. Well, the Presidential Study Directive 11 provides insights. To this day, it’s still classified, but it provides insights as to the structure and the deliberate decision-making process related to what came to be known as the Arab Spring. And it provides a timeline for the decisions leading up to the Arab Spring, which is why I was pushing it to get the document declassified and pushed out. . . . (read the rest of Part 2)