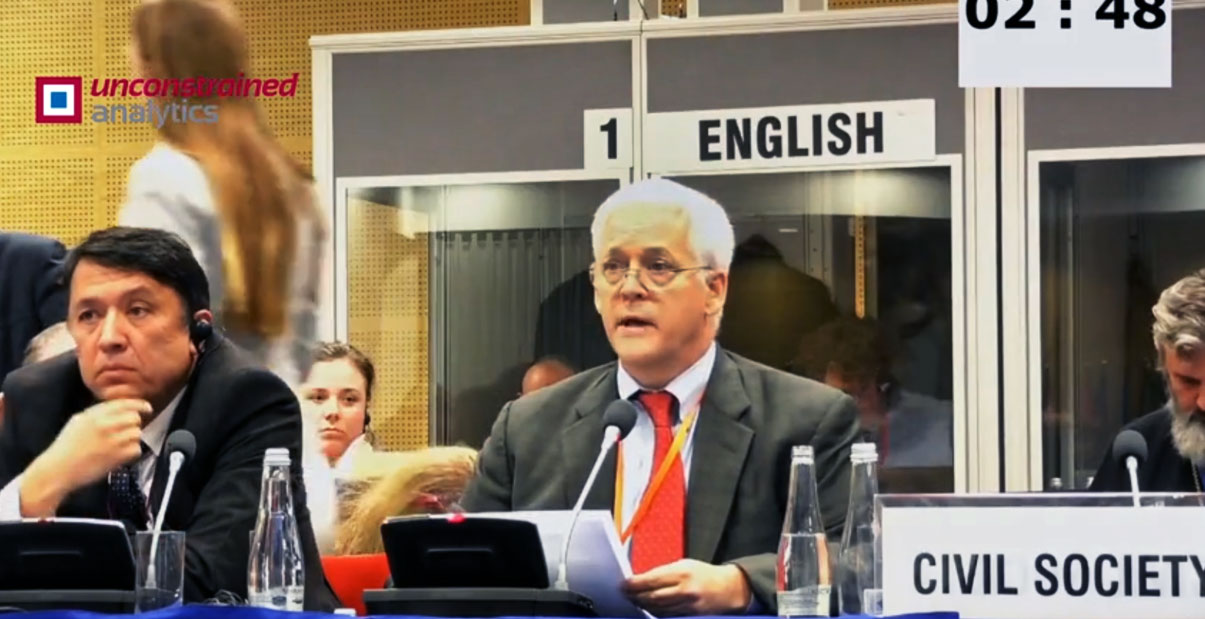 “It is not a coincidence that both Islamophobia and Hate Crimes converge on repurposed Neo-Marxist notions of racism to be arbitrated by unelected diplomats in international forums where the people are cut off from any meaningful participation. The energy behind prosecuting these “known-to-lack-definition” attack narratives is chilling.”

“Have you ever noticed that multi-culturalism always seems to mean every culture but you own – whatever culture that might be?”

Read his full statements to the OSCE or watch videos of them:

Stephen Coughlin: Thank you, madam moderator, ladies and gentlemen. At a formal OSCE Side Event in Warsaw in 2013, we got the drafters of the “Islamophobia” narrative to acknowledge that the term has no central definition.

In September 2019, the Tony Blair Institute for Global Change issued Designating Hate – New Policy Responses to Stop Hate Crimes that likewise designated Islamophobia a form of racism while also affirming that the term lacks for a definition – all the while seeking its aggressive criminalization. To no-one’s surprise, the Tony Blair report also acknowledges that Hate Crime has no definition.

At a May 2015 OSCE event in Vienna, at an official forum, we got an OSCE panel to admit that saying something known to be true can constitute hate speech.

As of May 2019, the UN General Secretary Antonio Guterres, in a speech on the “United Nations Strategy and Plan of Action on Hate Speech” called for stepped up action to prosecute Hate Speech even as the UN officially acknowledged that the term lacks definition.

It is not a coincidence that both Islamophobia and Hate Crimes converge on repurposed Neo-Marxist notions of racism to be arbitrated by unelected diplomats in international forums where the people are cut off from any meaningful participation. The energy behind prosecuting these “known-to-lack-definition” attack narratives is chilling.

Of course, as we are constantly reminded, “we all know what it is.” And we do! It is the granting to the state the arbitrary authority to prosecute its citizens for any reason or no reason at all. We will have those definitions after it’s too late to stop the process. When that happens, we will have completed the transition from citizens to subjects.

Just consider all the aphorisms built around slogans calling for the suppression of those who “seek to divide us!” Stripped of their saccharin narratives, these phrases, in the guise of prosecuting hate speech and Islamophobia, would give the state the arbitrary power to criminalize the dissent of its citizens. This is the rhetoric of totalitarianism. It is the abuse of language leading to the abuse of power. In forums like this, we are left to ponder whether our delegates are gullible, cynical or both.

Unconstrained Analytics recommends that the OSCE and all participating States – reconsider hate speech and Islamophobia. As they now stand, they are attack narratives designed to suppress free expression. Certainly, implementation should be suspended until articulable definitions are provided. Thank you! Stephen Coughlin: Thank you, madam moderator, ladies and gentlemen. There is a disfavored way to understand the Hate Crime campaign that recognizes it as a bundle of attack narratives designed to suppress free expression. Allow me to explain. “Aufheben der Kultur” – Negate the Culture – is the process of systematic negation of cultures.

Have you ever noticed that multi-culturalism always seems to mean every culture but you own – whatever culture that might be? This reflects the Marcusian application of narratives operationalized by Marcuse in “Repressive Tolerance” where words mean their opposite such that “tolerance” is the deliberate “intolerance” of the existing social order – whatever social order that may be – and hence, multiculturalism becomes the imposition of a hostile group on a target group for the purpose of destroying it through dialectical negation. Alongside these narratives, hate speech memes serve as enforcement mechanisms through the direct application of Habermas’s “Discourse Theory” of imposed consensus designed to suppresses dissent. Of course, this is undertaken by those positioned to self-empower themselves to make such determinations as to which cultures are to be destroyed.

There are many ways to interpret OSCE language like the “commitment to respect human rights and fundamental freedoms for all without distinction.” Who wouldn’t support this? I certainly do! But there is a growing perception that the tolerance being expressed in forums like the OSCE leaves them feeling on the suppressed side of repressive tolerance formulas.

The concern is that the language of tolerance is being purposefully repurposed through cynical narratives that turn such ennobling aspirations on their head. The pall of Marcuse’s “Repressive Tolerance” hangs over this forum. To quote Marcuse:

The reason many find themselves surprised when designated as members of the “right” is because that term, like racism and xenophobia, are simply applied to those who refuse to conform to repressive tolerance regimes that seek to deny people, cultures and nations of their identity. Aufheben der Kultur is about the destruction of cultures through the destruction of identity.

Unconstrained Analytics recommends that the OSCE and all participating States –undertake an inventory of the “racism, xenophobia and discrimination” narratives to determine whether they have, indeed, crossed over to the repressive tolerance application of the term. After all, delegates of participating Members are supposed to represent their people, not destroy them. Thank you!