PART 1: Discourse Theory as Assessed in “Warning on Racism” 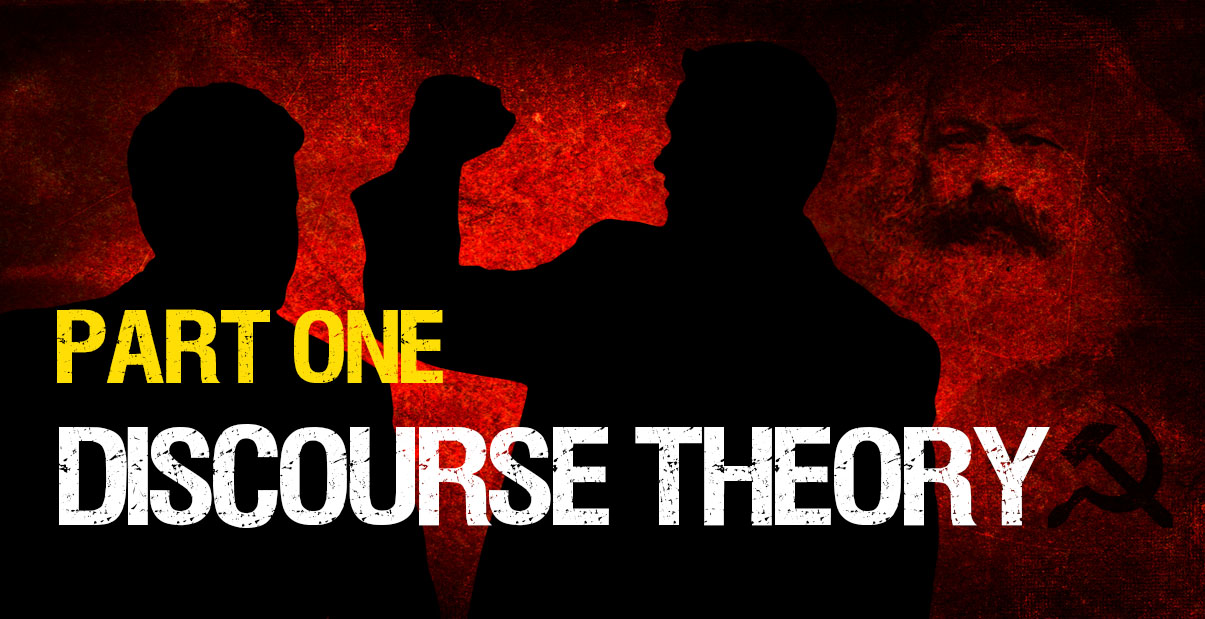 As discussed in “Warning on Racism,” Discourse Theory was identified as a tool that would be used to support Marxist “hate speech” narratives.

The objective of hate speech is to suppress speech and publication “in advance of [their] actual expression” through intimidation that anticipates violence. As such, hate speech imposes prior restraint on those on the wrong side of Marcuse’s repressive tolerance. How does Hate Speech work?

Borrowing from Krzysztof Karoń’s 2016 lecture on Semantic Marxism – Discourse Theory, “discussion” is the exchange of ideas based on facts that seek to describe what is real in the context of subjective interpretations that, upon verification, can be said to be objectively true.

For Habermas, this is not a problem. Cutting through Habermas’ pretentious dialectical narrative, Karoń explains:

When we translate into normal language, it means that the truth is what – during the discourse – is being presented as the truth and accepted as truth by all its participants. Because the condition for truth is the consensus, as it is easy to guess, the reference point for the argumentation supporting different positions cannot really be reality. It’s the power of persuasion that becomes the reference point. [Karoń]

Discourse Theory is a part of a larger strategy to impose the pseudo-real on the real.

Habermas’ argument hinges on a tortured construction of “consensus” that, as with discourse and discussion, positions it in a contrived dialectical contrast with “compromise” that allows “consensus” to masquerade as “compromise” for the benefit of the larger audience:

Consensus in the understanding that Discourse Theory does not mean the agreement of all the parties with their elaborated positions, but the abandonment of the previous position and the acceptance of the common position as one’s own. Consensus doesn’t so much mean acceptance as affirmation of the elaborated negotiating position. The prerequisite of the very adherence to the discourse is the renunciation of convictions about the objective legitimacy of one’s own position. [Karoń]

“And so, this was reminding me when we, in this so-called pandemic time, the news, the official news that are all the same from morning, to evening continuously brainwashing the people with excessive news.

And this news was all the same. There was not a possibility of an alternative news even to prove if these numbers, which we are told to us, are really true or not . . .

And when someone raised a question of possible doubts, which is always legitimate in a in a democratic society, and then you were labeled as a conspiracy theorist.

And in the Soviet times, when someone raised doubts about the official narrative of the ideology in the news and so on, he was labeled as enemy of the people.

And now, we are for witnessing evermore the vaccine mandate, forced in some way, it is a very cunning way.”

Discourse Theory narratives focus on the dialectical negation of individuals, entities, and ideas already targeted for destruction through “consensus.”

It’s a pure “might makes right” power play by those capable of imposing it through mass line narratives.

“It is logical, because if one is convinced of [one’s own] legitimacy, then the goal of participating in the discourse will be to justify the validity of one’s own position, rather than to strive for acceptance, or even affirmation of the common position, which isn’t the same as one’s own position.” [Karoń] Under Habermas’ Discourse regime, “anyone who represents a precise position that he would like to defend is opposing the idea of agreement and consensus and becomes the sower of discord, conflict, and hate [putting him] in the position of the ENEMY OF CONSENSUS.” [Karoń] Hence, the justification for hate in hate speech narratives is that “consensus” is opposed. In form, it operates through Dialogue in a Period of Praxis.

Ju-Jitsu them at their own game? Recognizing it as a “testimony to the dominance of Cultural Marxism,” Karoń warns those who mindlessly engage in Discourse Theory narratives that, even if they are in the opposition, they are still adopting Marxist messaging schemes that will ultimately co-opt them. Karoń concludes:

I’ll stubbornly reiterate: if anyone uses the notion of ‘discourse’ instead of ‘discussion’ or agrees to participate in a discourse and not a discussion, then he should realize that he is waiving the right to have precise convictions or to buttress himself with the knowledge of reality as an argument justifying those convictions. [Karoń]

In other words, you cannot defend the real in the pseudoreal – it’s rigged that way. Expressed in popular terms, to respond to blue pill narratives in the blue pill narrative renders one a blue pill player (“The Matrix Explains Political Warfare Realities,” Part 1, Part 2 & Part 3). Hence, when people respond to Marxist attack narratives in the narrative by “Ju Jitsuing them at their own game,” they are not only co-opted by them, they reify them in the process as well.

As noted in Black’s Law Dictionary, “prior restraint on speech and publication are the most serious and least tolerable infringement on First Amendment Rights.”

The American public is generally unfamiliar with active measures.

Following the string, from Bishop Athanasius Schneider, who recognizes communist dictatorship patterns, to COVID responses, to Josef Pieper, who explains the role of excessive information, to Yuri Bezmenov, who identifies these efforts as demoralization efforts.

Raised in the Soviet Union and Bishop of Astrakhan, Bishop Schneider speaks of similarities between Soviet rule and actions taken in the name of COVID:

“Yes, the control. Because in a communist dictatorship, with their controls.

All the day, night, I mean there were secret services, and there were in the social media only one-minded news presented to you distorted of course. Never know the alternative of having another opinion.

And so, in every school and even in the companies or factories and so on, there were commissions on communist ideology.

So, they had to maintain the ideology in public life continuously.

And so, this was reminding me when we, in this so-called pandemic time, the news, the official news that are all the same from the morning to evening, continuously brainwashing the people with excessive news. And this news was all the same.”

Josef Pieper on the role overwhelming people with data plays in an active measures campaign:

“It is entirely possible that the true and authentic reality is being drowned out by the countless superficial information bits noisily and breathlessly presented in propaganda fashion.

Consequently, one may be entirely knowledgeable about a thousand details and nevertheless, because of ignorance regarding the core of the matter, remain without basic insight . . .

Arnold Gehlen labeled it “a fundamental ignorance, created by technology and nourished by information” . . .

Something far more discouraging is readily conceivable:  the place of authentic reality is taken over by fictitious reality; my perception is indeed still directed toward an object, but now it is psuedoreality, deceptively appearing as being real, so much so that it becomes almost impossible any more to discern the truth.”

“They are contaminated. They are programmed to think and react to certain stimuli in a certain pattern.

You cannot change their mind, even if you expose them to authentic information.

Even if you prove that white is white and black is black, you still cannot change the basic perception and the logic of behavior.

In other words, these people, the process of demoralization is complete and irreversible.”

NEXT: PART 2: Discourse Theory in the context of COVID19 narratives
_