NEW Book by Rich Higgins: The Memo – 20 Years Inside the Deep State Fighting for America First 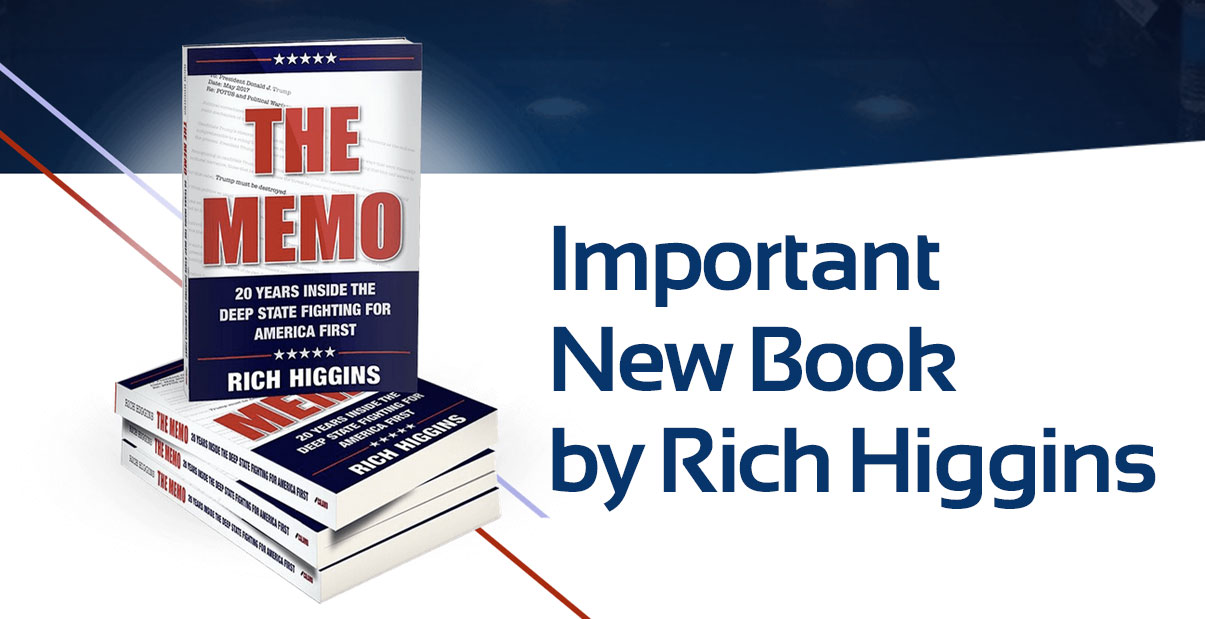 UA’s Rich Higgins has a new book published called, “The Memo – 20 Years Inside the Deep State Fighting for America First.” It’s the story of how his twenty year career inside the Deep State enabled him to discern – well before anyone else – the Deep State’s efforts to stop and ultimately remove the President from office. No one was more bold – or more frighteningly accurate – in anticipating the ferocity of the Deep State’s assault on the Constitution and President Trump. The book is a story of why MAGA–why Donald Trump was elected. It’s an insider’s account from deep inside the swamp of Washington, DC and how the system really works. Rich has worked in the national security community for 20 years and he saw a lot of things that really made him shake his head. What he ended up realizing is that people who sought the truth ended up getting punished and pushed aside.

Particularly during the Obama administration, there was an ideology that drove everything inside the national security community and this made Rich wonder whose interests are we serving? Rich joined the US Army as a soldier and later became an executive in the Department of Defense at the Pentagon to serve his country, not to serve special interests or corporations or foreign influences. This book shares his experiences of what happened. Everything you read in this book is 100 percent factual, first-hand accounts.

When I was a surrogate for the Trump campaign in 2016 I frequently used the term Deep State as an all-encompassing term for the forces who opposed the candidacy of Donald J. Trump. And like clockwork, after each speech, I was approached by audience members who would tell me to abandon the term as I came across as a “conspiracy theorist.”

I would ask, “do you disagree with my assessment?”

“No, but if you want to be taken seriously you should use a more neutral term.”

Well, that was then and this is now. Even the New York Times acknowledges there is a Deep State but we should be thankful for it because it “exists to battle people like Trump.”

I guess I was ahead of the curve but I have always called things the way I see them. It didn’t matter if I was in a meeting with Secretary Rumsfeld or with President Trump, you can’t shy away from telling the truth. Political correctness is a weapon against reason and critical thinking. Our leaders don’t usually make poor decisions because they have a nefarious agenda; they do so because those responsible for advising them are afraid to tell the truth. They are afraid to deviate from the party line. And for this, our country has paid a tremendous price.

This book is the story of my twenty year career battling what people now refer to as the Deep State. I want my readers to understand what we are up against from someone who has been in the trenches. I want the tens of thousands of patriots inside the system to learn from my successes and failures and to most importantly understand that you will be rewarded for taking a stand. Many patriots have lost much more than a secure government job in defense of our nation.

The COVID-19 pandemic is an escalation by the Deep State in their efforts to prevent the American people from reclaiming their country7. They will do anything to stop us.

Now the Deep State is going for blood. We can win but we have to view the war through this prism. You cannot view these events in isolation.

The story is a warning, an explanation, a call to arms. I hope you will join me in this fight.

PREVIEW inside the Kindle book: