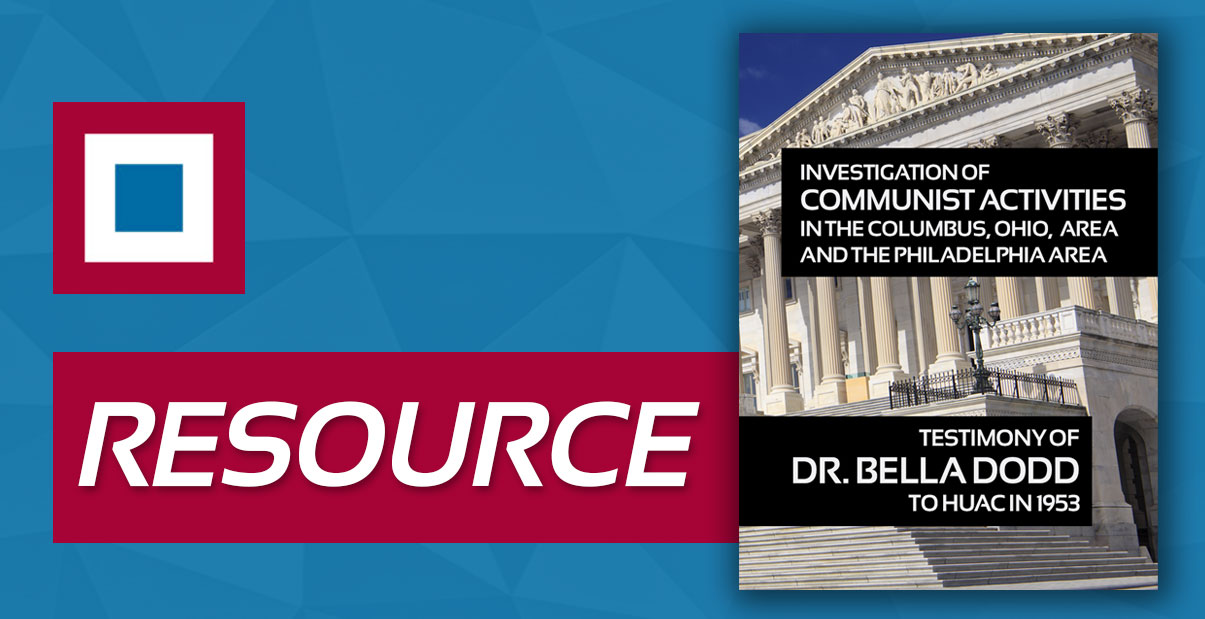 In UA’s report, Re-Remembering the Mis-Remembered Left: The Left’s Strategy and Tactics To Transform America, the testimony of Dr. Bella Dodd to the House Un-American Committee (HUAC) in 1953 is frequently quoted and referenced. Dr. Dodd was a lawyer, union activist and member of a the US Communist Party from 1932 to 1949, rising through its ranks in the national committee until 1949 when she was expelled during an internal purge of the Party. Interestingly and having parallels to the Left name-calling today on social media, the Party publicly denounced her by labeling her as being, “anti-Negro, anti-Puerto Rican, anti-Semitic, anti-labor, and the defender of a landlord.”

She talks about how easy is was to become part of the Left philosophy as, like many Americans, her heart went out to the underdog.  “The Communist support seems to be large because people are sucked into things which seem to be good in themselves. They don’t recognize that the Communist Party uses these slogans, these generalizations, in order to break down their resistance, and ultimately they are tied in with the Communist movement. Some were against discrimination. We are against repression, against war, against fascism, and the Communist Party takes our best instincts and uses them against us by twisting us into a program which they want us to follow.”

UA is making her complete 1953 testimony available for those who wish to read further into her remarkable testimony:

Selected quotes from the HUAC testimony as well as her book, School of Darkness, that are referenced in the Re-Remembering the Mis-Remembered Left report: “The American people have got to stop fooling around with just fighting communism in the abstract. They have got to know what the thing means, why they are against it, and how to fight it.”

“I was told by Gil Green, chairman of the party in New York State, that if ever communism came to America it would not come under the Socialist label or the Communist label but it would come under a label palatable to the American people.”

“Communism is like a religion. President Eisenhower said that the other day, but it is a religion without a God. If you believe strongly in communism, it is your duty to bring it into every phase of your life . . . Communism is a way of life, and it is almost like a religion. It becomes a part of you. It affects your entire thinking. It affects your attitude toward your students, toward your government, affects your attitude toward things that are happening day by day. Most Communist college professors begin by being very much interested in their students, and if they have a Communist philosophy, they pass it on.”

“In New York State, we used them in the American Labor Party, and in the Progressive Party. There have been places where we sent them into the Democratic Party or the Republican Party to operate as Republicans and Democrats, you know, but to operate as Communists within their organizations.”

“The Communist conspiracy provides for the infiltration of every phase and field of American life. Communist objectives are

“There had been many things I had not really understood. I had regarded the Communist Party as a poor man’s party, and thought the presence of certain men of wealth within it accidental. I now saw this was no accident. I regarded the Party as a monolithic organization with the leadership in the National Committee and the National Board. Now I saw this was only a facade placed there by the movement to create the illusion of the poor man’s party; it was in reality a device to control the “common man” they so raucously championed.”

“But the Communists were very clever in giving us two alternatives, which really were not alternatives. They put themselves at the head of the anti-Fascist movement. They said “We are the great anti-Fascists” and since you wanted to fight fascism you fell into the trap of working with the Communists.”

“Anyone who opposes the Communist line, anyone who is going to hurt them in any way, is bound to get the full impact of the attacks of the Communists plus all of their friends. The attack is always in high-sounding words. The congressional committees of the United States Government become the agents of Fascists, and therefore, everyone is asked to organize against the ‘agents of fascism’.”

“As long ago as the 1940’s the (Communist) Party was planning the cynically to use Negroes as instruments in the revolution-to-come in the United States. The theory, contrived by Stalin and unleashed by Foster, was to encourage ‘self-determination of the Negroes in the black belt’ and the establishment of a Negro nation with the right to secede from the United States.”

“There are two phases of life that Communists take over. One is control over money, and two is control over words/language. They are fast taking over all the nice words, all the nice language of the Christian world, and they are taking them to themselves and giving them new connotation so that when they talk to the world they are saying one thing which is understood by their followers, but to our ears it sounds like the things which we should be saying.”

“The Communist’s theory of getting where it wants is through conflict—creating conflict. They will very often create an organization for the purpose of engendering conflict. If no conflict exists, they will engender the conflict and engender it in a certain position which drags the whole public opinion to the left in the direction of Communism. And so, when I was in the teacher’s union we had Communists, we had Socialists, we had all kinds of splinter groups . . . They never create the conflict and confusion way over on the right, but they will create a right in order to have the left oppose to it so they can drag people in the direction of the left.”

The Left deployed thought-terminating clichés in the American political arena as far back as the 1940s. From Bella Dodd’s testimony to the House Committee on Un-American Activities (HCUA) in 1953, not only does one find the CP-USA’s deployment of the “McCarthyist” meme but also, as a precursor to “Make America Great Again”, attacks on “America Firsters.” From Dodd, Columbus Testimony, 1761-1762:

“Mr. KUNZIG. Do they fight back by methods of fear, and if so, will you explain how that is done?
Dr. DODD. Anyone who opposes the Communist line, anyone who is going to hurt them in any way, is bound to get the full impact of the attacks of the Communists plus all of their friends. The attack is always in high-sounding words. The congressional committees of the United States Government become the agents of Fascists, and therefore, everyone is asked to organize against the “agents of fascism.”
Mr. KUNZIG. You mean that is what the Communists say?
Dr. DODD. That is what the Communists say.
Mr. SCHERER. That is “mild,” Doctor, anyone who opposes them is called a Fascist or an America Firster.
Dr. DODD. Or it becomes a McCarranite, or a McCarthyite. Let me assure you that these are just general smear words. They are emotional words. They are words which have no definition, and first you create a sense of fear and hatred and then you apply this word to everyone against you . . .
. . . The Communists do have representation in practically every key area in America . . . How do they promote this resolution? First, they will get someone to make a statement. They get a Communist not known as a Communist. Take a person, let say a person who is outstanding in religious fields or educational fields. He will write . . .
Mr. KUNZIG. You mean a Communist outstanding in a religious field?
Dr. DODD. Might be.
Mr. CLARDY. But you say one not known as a Communist?
Dr. DODD. An outstanding professor not known as a Communist. He and 2 or 3 others will then get a telegram saying, “We are opposed to the investigation of this committee. It promotes the interest of the McCarthyites, and so on and so forth.” Then, that telegram is sent to, let’s say, a thousand other people. They have lists. I have had them myself, lists of ministers, doctors, lawyers, and others.
Mr. SCHERER. You mean the lists are in the party headquarters?
Dr. DODD. Lists are in party headquarters and in some of the front committees, which they have established like the American Committee for Democracy and Intellectual Freedom, run by a secretary who is a member of the Communist Party.
Mr. CLARDY. Are you talking about a list of Communists or non-Communists?
Dr. DODD. There will be a list of both, non-Communists and Communists, predominantly non-Communists, but people who they can use from time to time to respond to various causes.
Mr. CLARDY. People, you mean, who are occupying positions of some importance so that their ideas will carry weight?
Dr. DODD. That is right.”

Read more: Testimony of Bella Dodd to HUAC in June 1953 in Columbus and November 1953 in Philadelphia (PDF)

Her book: School of Darkness