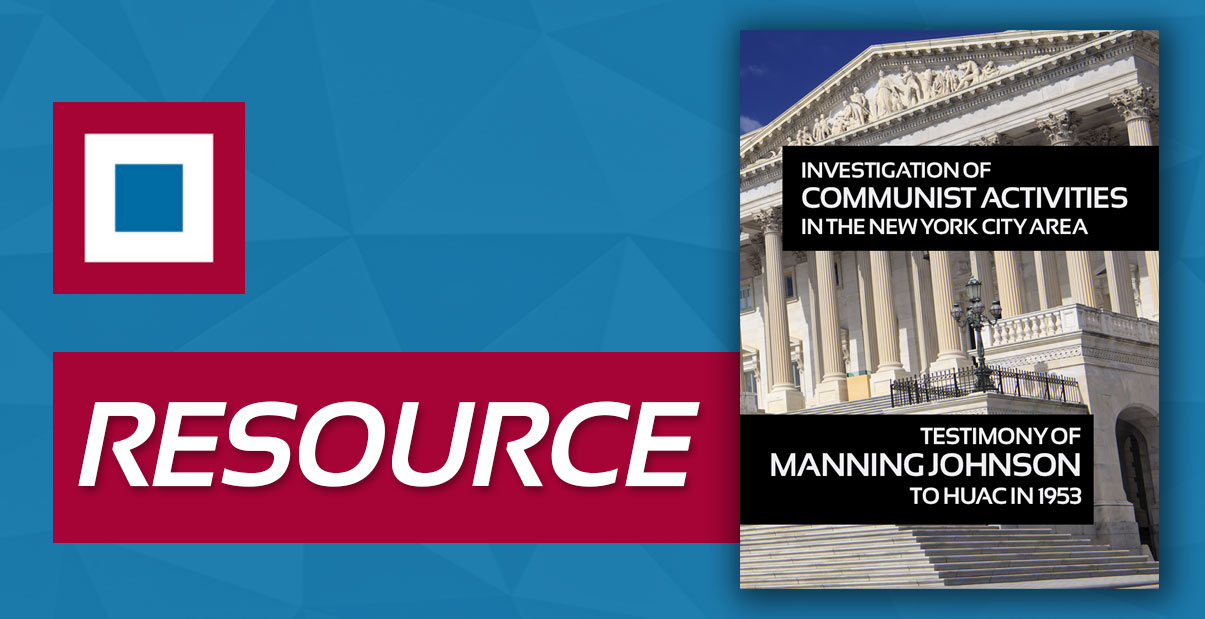 In UA’s report, Re-Remembering the Mis-Remembered Left: The Left’s Strategy and Tactics To Transform America, the testimony of Manning Johnson to the House Un-American Committee (HUAC) in July 1953 is frequently quoted and referenced. Manning Johnson joined the US Communist Party in 1931 and worked as an Organizer in Buffalo, NY, until he transferred to New York City where he joined the National Committee of the Communist Party. He left the Party in 1940 and is the author of Color, Communism, and Common Sense.

He writes about his path to following Left philosophy:

“. . . To me, the end of capitalism would mark the beginning of an interminable period of plenty, peace, prosperity and universal comradeship. All racial and class differences and conflicts would end forever after the liquidation of the capitalists, their government and their supporters. A world union of Soviet States under the hegemony of Russia would free and lead mankind on to Utopia. Being an idealist, I was sold this “bill of goods” by a Negro graduate of the Lenin Institute in Moscow.

The color of one’s skin is no bar to a young man or woman dreaming of making a better world. Like other Negroes, I experienced and saw many injustices and inequities around me based upon color, not ability. I was told that “the decadent capitalist system is responsible,” that “mass pressure” could force concessions but “that just prolongs the life of capitalism”; that I must unite and work with all those who more or less agree that capitalism must go.

Little did I realize until I was deeply enmeshed in the Red Conspiracy, that just and seeming grievances are exploited to transform idealism into a cold and ruthless weapon against the capitalist system—that this is the end toward which all the communist efforts among Negroes are directed.

Indeed, I had entered the red conspiracy in the vain belief that it was the way to a “new, better and superior” world system of society. Ten years later, thoroughly disillusioned, I abandoned communism. The experiences of those years in “outer darkness” are like a horrible nightmare. I saw communism in all its naked cruelty, ruthlessness and utter contempt of Christian attributes and passions. And, too, I saw the low value placed upon human life, the total lack of respect for the dignity of man, the betrayal of trust, the terror of the Secret Police and the bloody hand of the assassin, during and since, those fateful years when I embraced communism. . . .

. . . After two years of practical training in organizing street demonstrations, inciting mob violence, how to fight the police and how to politically “throw a brick and hide,” I was ready, in the opinion of my leaders, for a top communist school.  . . . .”

UA is making his complete 1953 testimony available for those who wish to read further into his powerful testimony:

Testimony of Manning Johnson to HUAC in July 1953 (PDF)

Selected quotes from the HUAC testimony that are referenced in the Re-Remembering the Mis-Remembered Left report:

Screen capture from this report, page 53: “I sat in on meetings of the national committee of the Communist Party in New York City. These were meetings of the national committee at which were discussed the formation of the American League Against War and Fascism. The substance of these discussions was that the Communist International had formed an organization known as the World Congress Against War . . . The American party was instructed by the Communist International to form the American League Against War and Fascism. This organization was officially set up at the first United States Congress Against War, held in New York City in 1933.”

[W]hen such a campaign like the one against war and fascism is:

then that is a different matter altogether.”
~

“The united front was a development of a new tactical line by the Communist International in 1935. This new tactical line was developed at the seventh world congress of the Communist International in Moscow in 1935 . . . Now, the essence of it was to infiltrate churches, trade unions and all other organizations through the process of involving them into a so-called united front on the basis of a program presented to them by the Communist Party. The united front was a coalition or an alliance of the church, trade unions, farm and youth and women’s organizations of the Communist Party, under Communist Party leadership and for the promulgation of the Communist Party program. It was a step in the formation of a people’s front government, which of course is a form of transition to proletarian revolution and the seizure of power in a given country . . . The united front is used for revolutionary training of the masses.”
~
“The Outstretched Hand was the new united-front policy of the Communist International applied all over the world. It was the extension of the hand of friendship and cooperation to the church, while in the other hand holding a dagger to drive through the heart of the church. In other words, it was a ruse whereby they could get the churches involved in united-front activities with the Communists so that the Communists could bring to the religious element in America their antireligious program. In other words, to educate the masses in the revolutionary program and policy of the Communist Party, to prepare them ideologically and organizationally for the overthrow of the Government of the United States . . . In other words, what he is saying is that if you cannot take over the churches by frontal attack, take them over by the use of deception and guile and trickery, and that is exactly what the Communists practice in order to infiltrate and subvert the church and prepare them for the day when they would come under the hierarchical and authoritarian control of Moscow.”
~
“There were quite a few of them who were duped, but the Communist clergymen and fellow travelers and those under Communist Party discipline were not duped. They were fully conscious and fully aware of what they were doing. They were the small minority that utilized their position to infiltrate and seek to subvert the majority of the clergy in the interests of the aims and objectives of the Communist Party of the United States’.”
~

READ: Testimony of Manning Johnson to HUAC in July 1953 (PDF)