Defeating the Islamic Movement Inside the United States: A Strategic Plan 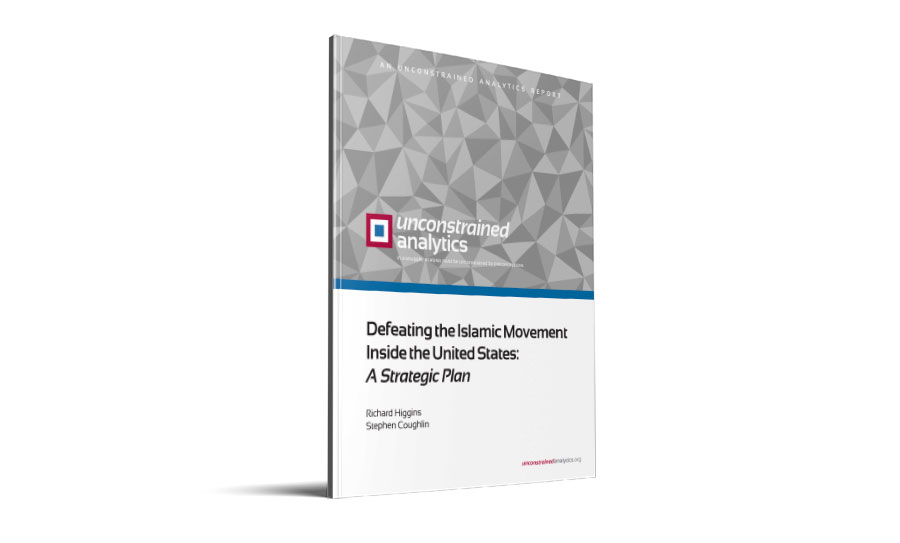 WHITE PAPER: Defeating the Islamic Movement Inside the United States: A Strategic Plan

We in this country, in this generation, are—by destiny rather than choice—the watchmen on the walls of world freedom. We ask that we may be worthy of our power and responsibility, that we may exercise our strength with wisdom and restraint, and that we may achieve in our time and for all time the ancient vision of ‘peace on earth, good will toward men.’ That must always be our goal, and the righteousness of our cause must always underlie our strength. For as was written long ago: ‘Except the Lord keep the city, the watchmen waketh but in vain.’ —John Fitzgerald Kennedy, 1963 1. Fifteen years after 9/11, the United States is losing the war against the Islamic Movement—not on the kinetic battlefield, but in the information battle-space, where the enemy has excelled at diverting our National Security efforts away from his true objective: a global Islamic State subordinated to Islamic law (sharia).

2. The United States needs a new strategic approach that begins with accurate threat identification in support of operational plans to counter the Islamic Movement, most urgently inside the United States itself.

3. The Islamic Movement advances along multiple lines of effort, including immigration, infiltration, and the compromising of key pillars of American society ranging from academia, banking and finance, faith communities, and government to the legal system, media, military, and National Security.

4. Those tasked with defending the Republic of Washington and Lincoln must develop and effectively execute a whole-of-society strategy to defeat each of those lines of effort domestically—even as a new National Security strategy is implemented to deal with associated offensive Islamic Movement activities in the global arena.

5. The Muslim Brotherhood forms the vanguard of the Islamic Movement inside the United States but coordinates its civilization jihad campaign with its associated splinters, most notably the Organization of Islamic Cooperation and violent jihadi groups like Al-Qaeda and the Islamic State.

6. Since the late 20th century, the Muslim Brotherhood (like its Shi’ite counterpart, the Iran Lobby) has worked closely with far left entities, including anarchists, communists, progressives, and other revolutionaries likewise committed to the destruction of America and Western Civilization.

7. The Islamic Movement and its Marxist partners achieved such a critical degree of penetration and influence by undermining America’s commitment to its own founding principles. To regain that commitment and restore those principles, we must first take back control of the language used to describe the enemy and the war we are fighting.

8. Speaking the truth in a language that recognizes and can express the truth is the first and most critical step in returning to a fact-based, evidence-driven assessment of the Islamic Movement and the jihad it wages against us. This National Security strategy Campaign Plan offers a framework to begin that process.

The United States began awakening to the war with the Islamic Movement after the terror attacks in September 2001. Our efforts have been ineffective. Despite the investment of lives and treasure, America is not safer. We are losing this war, and the people know it.

The U.S. Government needs to execute the strategy outlined in this document—with force, purpose and determination. The strategy has been developed without political filters and is grounded in facts that define the threat posed by the Islamic Movement.

How bad are things? Very bad. The failure to identify, define, and counter the Islamic Movement and its threat to the American political philosophy and way of life endangers current and future generations of Americans and may lead to the end of the Republic.

In five years, given current immigration rates and the gains being made overseas by Islamic Movement-affiliated entities, sharia-inspired wars will begin across Europe. In the U.S. Government’s current state of reality dislocation, there is a high likelihood that U.S. policy will support the insurgent Islamic movements in these European countries.

In ten years, the Islamic Movement will have consolidated the new Caliphate under the leadership of the Organization of Islamic Cooperation (OIC) and begun the Caliphate’s expansion into Europe. Domestically, the United States will be ideologically fractured by the growing alliance between the hard left* and Islamic ideologies, both of which are already fueling domestic conflict. In 20 years, the United States may no longer exist as a unified nation under a common political philosophy.

At present, the language used to fight the counter-terror war has been distorted in the name of moral relativism. It traps decision-makers in false narratives that facilitate false understandings of the nature and scope of the threat and lead to false choices between either under- or over-reacting to events. The language used by the U.S. Government today to discuss the war is structured to bring about our defeat. Failure to act now ensures our demise.

This document seeks to change the U.S. Government’s strategic understanding of the nature of the war and offers an alternative pathway that leads to strategic victory. The strategy proposed here prioritizes the strategic defense of the United States over foreign considerations. While working to secure the homeland, we will assist our allies abroad as we are able, but not at the expense of America’s national security. This strategy emphasizes the need:

This Campaign Plan seeks to rescale our efforts to fight the enemy where he operates, at the strategic political level, and re-orient the United States to recognize and respond properly to the enemy’s explicitly stated threat doctrines. In so doing, this document serves as a roadmap that allows the United States to both defend against the Islamic Movement and begin aligning the requisite ways and means to achieve our country’s strategic ends, defined in measurable, achievable, and realistic terms.

Speaking the truth is a challenge in a National Security establishment that has become informed by today’s moral relativism. The objective of moral relativism is to reduce thinking to a state where, as philosopher Josef Pieper said, people are “satisfied with a fictitious reality created by design through the abuse of language.” Blindness to the truth among the National Security elite was achieved by replacing factual, evidence-based analysis of the Islamic threat with relativist constructs that collapsed the strategic intelligence process. The days of deadly institutionalized ignorance must be brought to an end. On top of everything else, this document should serve as a guideline for a return to speaking truth, with common sense as the guiding principle.

The Campaign Plan presented here is structured to work within the current or proposed National Security and law enforcement statutory framework.