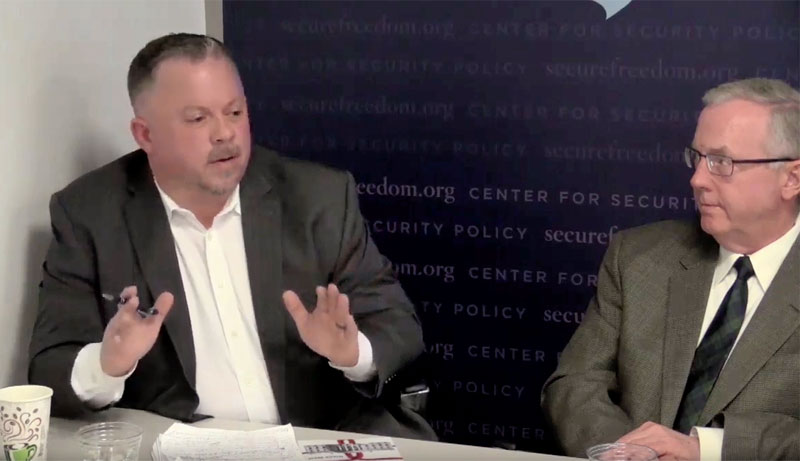 UA Senior Fellow Rich Higgins was on a panel held by the Center for Security Policy to discuss the launch of Diana West’s new book “The Red Thread: A Search for Ideological Drivers Inside the Anti-Trump Conspiracy.”

In addition to author Diana West, Chris Farrell, Director for Investigations and Research at Judicial Watch, was on the panel, moderated by Frank J. Gaffney, Jr., Executive Chairman of the Center for Security Policy.

RICH HIGGINS: As somebody who operates regularly inside this community, it’s refreshing to have a breath of factual information sweep into the system. For so long now, the United States has been caught up in a PC malaise–this politically correct malaise—that drives and conditions us to move away from reason and move away from critical thinking. The thing I take away this book is that we need to do more work inside this area.

Lincoln famously said, “If we could first know where we are, and whither we are tending, we could then better judge what to do, and how to do it.” I think we’re at that point of reflection. It’s really important that we move this away from a partisan political discussion. This is not a partisan political discussion. This is: do we continue to exist as a Republic under the Constitution? That’s how important this is. If we move past this with no prosecutions and nobody going to prison for this, I think we have officially, then, entered the post-Constitutional era and I don’t know if we’ll ever recover it.

Some of the things that I really walked away thinking is that with most Americans, this includes people in the national security community–perhaps even more so than the civilians, there is a dearth, an absence, a vacuum of knowledge regarding the history of Marxism and socialism going all the way back to the Hegelian dialectic and up to how that informs things like were mentioned on this panel: the Students for a Democratic Society.

I would argue that probably 95% of the people in today’s Intelligence Community are not familiar with that history of American intelligence.

Back during the Trump campaign, I watched as veterans flocked to President Trump. Diana does herself credit in the book because hers is the first book I’ve seen that accurately reflects the counter-revolutionary nature of Trump’s election itself, which was a rejection of this post-modernist Marxist, cultural revolution that has taken place.

It’s important that looking back at this, maybe 50 to 100 years from now, we understand the context within which this has taken place. To do that analysis in a purely partisan way misses the nature of Trump’s election. Diane’s book is the first one that captures that effectively and does much to explain individuals like Comey, Brennan, and all the way to President Obama himself, and why their Marxist influences really drove the behavior that surrounded this coup.

In terms of tradecraft, the thing I take away from this is that most Americans think of tradecraft as spying, stealing of secrets. But the purpose of intelligence operations is the influence on the deliberate decision-making process of your adversary. Whether that be to blind him or to inhibit his policy solution set or to perhaps drive him into actions inimical to his own interest. I think this book accurately captures that it’s a far more insidious and subtle threat than most people think. The “glory” of the guy stealing the suitcase–that’s a bunch of nonsense. This book is one of the best spy, intelligence, influence warfare books that’s been written, period, if you really want to understand it.

It’s amazing to me that for a country, the United States, founded on an idea, that we don’t understand ideological warfare. Going back to the Sons of Liberty meeting at the Green Dragon tavern in Boston and the confluence of events that allowed the United States to even be formed, it’s similar to today. Back then they had the printing press and the printing press allowed Thomas Paine’s Common Sense to propagate across the continent. The same with the advent of the Pony Express which for the first time allowed events in Boston to be shared quickly with people around the country. Back then of course it was days and weeks not seconds in the Twitterverse, but similar I think we’re in that same sort of information age revolutionary period here and where ideological warfare is now more important.

Beyond the domestic side of the security threat that’s related to this, people reading this book need to be asking themselves where is the Russian influence. You talk about that in the book and who was REALLY working with the Russians. But where are the Chinese in this game? As the you know the PRC is the most fascist, totalitarian, communist country that has ever existed. It makes the Soviet Union look small by comparison in terms of their actual militancy and the mechanisms by which they have come forth in places.

I can’t say enough about the takeaways from the book. In fact I think I’m still processing it because it’s one of those books that you read and you have to keep revisiting and going back to it.

The final take away from it is, I talked to a lot of the “older guys,” 70-plus guys who fought the Cold War. I’ve shared some of what Diana wrote with them and they are just struck by the comparisons from the 1930s and the 1950s, which she also touched upon in your other great book, “American Betrayal: The Secret Assault on Our Nation’s Character,” which I agree with Chris–it should be required reading. It is one of most important, probably THE most important national security book written in the past 25 years, maybe ever.

As somebody who studies this, the future of warfare is going to look a lot more like what we’re seeing today then people would like to believe. It is economic, it is legal, it is information. The Chinese are telling us this. The Russians are telling us this. So “The Red Thread: A Search for Ideological Drivers Inside the Anti-Trump Conspiracy” is timely book and I can’t say enough about it.

Mentioned in the above video interview

Archbishop Viganò: We are faced with a colossal deception, based on lies and fraud
September 3, 2021
Search