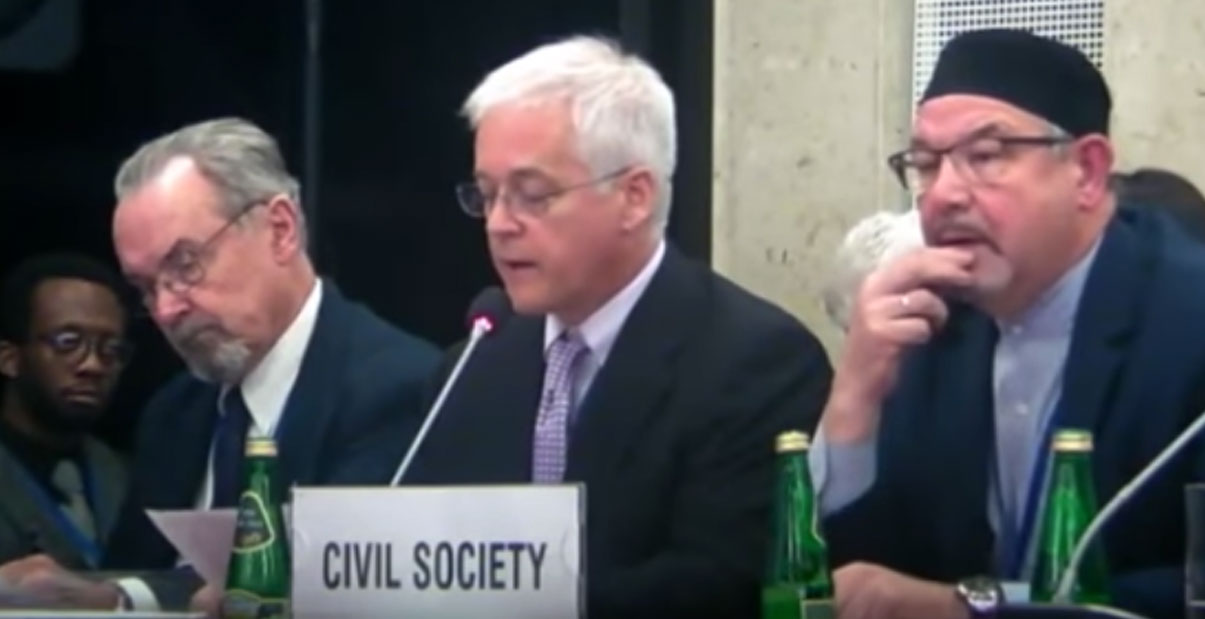 Stephen Coughlin attended the 2016 OSCE (Organization for Security and Co-operation in Europe) “Human Development Implementation Meeting” in Warsaw, Poland and spoke to this committee, as he did in 2015.The OSCE uses the language of cultural-Marxism to turn free societies into totalitarian Marxist and Communist societies.

The ‘Islamophobia’ industry’s all-out assault on free speech was on full display at the recent annual meeting of the Organization for Security and Co-operation in Europe (OSCE) Human Dimension Implementation Meeting (HDIM) in Warsaw, Poland. The Center’s VP for Research and Analysis Clare Lopez and Senior Fellow Stephen Coughlin attended the 26-27 September 2016 session, along with Debra Anderson, ACT! For America Chapter leader in Minnesota, Dave Petteys, ACT! Chapter leader from Colorado and key European colleagues Elizabeth Sabaditsch-Wolf from Austria, Henrik Clausen from Denmark, and Alain Wagner from France.

The Organization for Security and Co-operation in Europe (OSCE) is a 57-member regional security organization with representatives from North America, Europe and Asia. It describes itself as a ‘forum for political dialogue on a wide range of security issues’ whose approach encompasses ‘politico-military, economic and environmental, and human dimensions’. The Office for Democratic Institutions and Human Rights (ODIHR) is an office within the OSCE that claims to be dedicated to democratic elections, respect for human rights, rule of law, tolerance, and non-discrimination.

Their stated overall objective is helping governments protect and promote human rights, fundamental freedoms and tolerance and non-discrimination, as well as to improve and strengthen democratic practices and institutions. Except that the actual theme of the two-day proceedings had a lot more to do with countering ‘hate crime,’ criminalizing ‘hate speech,’ and demonizing ‘Islamophobia’ and ‘Islamophobes’ than it did with genuinely championing the right to believe, live, and speak freely.

Of course, the campaign to shut down free speech when it’s about Islam is very much in line with the top agenda item of the OIC (Organization of Islamic Cooperation), which is to achieve the criminalization of criticism of Islam in national legal codes. Gagging criticism of Islam is also what the UN Human Rights Council Resolution 16/18 tries to do. Then-Secretary of State Hillary Clinton worked hard to make that happen in the U.S. and around the world when she promoted the Istanbul Process. The idea is to use existing laws against ‘incitement to violence,’ but in a novel way that applies a so-called ‘test of consequences.’ That is, if someone, somewhere, sometime decides what somebody said somewhere, sometime is offensive and then launches a ‘Day of Rage,’ or goes on a lawless rampage destroying property, injuring or killing people, guess whose fault that would be? Under the ‘test of consequences’ speech code, that would be the speaker.

Notably, though, the Islamophobia crowd seemed to be very much on the defensive at this OSCE meeting. Their crouch-and-whine posture most likely had to do with the accelerating numbers of horrific Islamic terror attacks, whose trail of carnage and destruction is splashed across screens around the world for all to see. Along with those visuals comes increasing awareness on the part of more and more ordinary people that when they yell ‘Allahu Akbar,’ it doesn’t mean ‘Hail to the Redskins’: it means they are committing that attack in the name of Allah and Islam.

The ‘Islamophobia’ industry has neither the ability nor actual wish to stop jihad but it sure does wish so many were not putting ‘Allahu Akbar’ and Islamic terror together and then speaking out about it. The only recourse left to them is trying desperately to shut down free speech-including places like the U.S. where free speech is Constitutionally-protected. As CSP Senior Fellow Stephen Coughlin puts it:

This is a direct extraterritorial demand that non-Muslim jurisdictions submit to Islamic law and implement shariah-based punishment over time. In other words, the OIC is set on making it an enforceable crime for non-Muslim people anywhere in the world-including the United States-to say anything about Islam that Islam does not permit.

In other words, what they’re trying to do is enforce shariah’s law on slander – on us, on everyone, whether Muslim or not.

That effort at the Warsaw OSCE meeting went at it by various means: there was a great deal of emphasis on equating Islamophobia with ‘racism’ (but a new kind – not based on skin color), ‘bigotry,’ and violation of ‘human rights.’ Pouty complaints were heard about ‘feeling discriminated against,’ ‘marginalized,’ and the object of ‘hard looks’ because of wearing a hijab. When legal eagle Steve Coughlin and Danish defender Henrik Clausen demanded a specific legal definition of the term ‘Islamophobia,’ they were assailed for…you guessed it, ‘Islamophobia’! Needless to say, there was no legal definition forthcoming (because ‘everybody knows what it means’).

‘Islamophobia’ hysteria reached peak during the OSCE’s second day plenary session, where the Turkish General Secretary of the European Muslim Initiative for Social Cohesion (EMISCO), Bashy Qurayshi, came unglued with a plaintive wail that ‘Islamophobes’ who’d been permitted to infiltrate the OSCE were “lying, ranting and attempting to spread hatred at this conference.” He even threw in a reference to such ‘Islamophobes’ as ‘Nazis,’ at which point senior representatives at the OSCE head table actually broke into applause.

By way of counterpoint, however, it must be added that many delegates from Civil Society organizations throughout the OSCE membership area-including atheists, Baha’is, Christians, Jews, Jehovah’s Witnesses and Mormons-firmly pressed the case for free speech. We know that they took encouragement from our presence and outspokenness, even as we did from theirs.

The ‘Islamophobia’ crown went home from Warsaw in the sure knowledge that their attempts to silence free speech about Islam have stirred a gathering force of liberty’s champions who will not be silenced.

For more coverage of this year’s OSCE Human Dimension Implementation Meeting, including photos and video, please see Gates of Vienna at https://gatesofvienna.net/