To Our Great Detriment: Ignoring What Extremists Say About Jihad 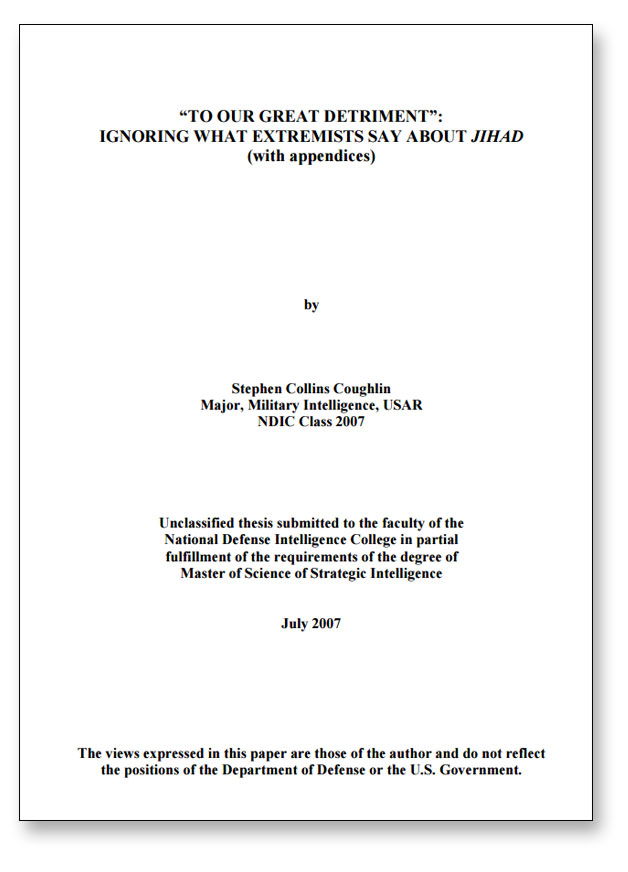 To Our Great Detriment: Ignoring What Extremists Say About Jihad is the unclassified thesis submitted by Major Stephen Coughlin, Military Intelligence, USAR, NDIC Class 2007 to the faculty of the National Defense Intelligence College in partial fulfillment of the requirements of the degree of Master of Science of Strategic Intelligence, July 2007.

Chapter One – THE CHAIRMAN’S CHARGE

Chapter Six – DISARMED IN THE WAR OF IDEAS

A. MUSLIM BROTHERHOOD AND THE CALL TO JIHAD
B.. IS THE IRAQI CONSTITUTION FATALLY FLAWED?
C. ABROGATION AND PROGRESSIVE REVELATION
D. THE CALIPHATE EXPLAINS VERSE 5:51 TO THE UMMAH

“However absorbed a commander may be in the elaboration of his own thoughts, it is sometimes necessary to take the enemy into consideration.” —Sir Winston Churchill, as quoted in FM 34-130 Intelligence Preparation Battlefield.

“And I know there is an international jihadist movement that desires to do us harm and they have territorial ambitions. The reason I know that is that’s what they’ve told us. And part of their territorial ambition is to have safe haven in Iraq. That’s what they’ve said. That’s what the enemy has clearly said. And it seems like to me that the Commander-in-Chief ought to listen to what the enemy says.” —President George W. Bush Rose Garden Press Conference June 14, 2006

In a series of comments on The National Strategy for Victory in Iraq made at the National Defense University, 1 December 2005, four years into the War on Terror (WOT), Chairman of the Joint Chiefs of Staff General Peter Pace explained that:

“To talk about how we are going to proceed, we need to understand the nature of the enemy. And clearly, the nature of this enemy is different than any we have faced in the past …. Our enemies had declared war on us years before, but the attacks in New York, in the skies over Pennsylvania and here in Washington, D.C. brought home very clearly to us that we were at war.”

Consistent with the Chairman’s injunction is the implication that after five years of prosecuting the War on Terror (WOT) we still don’t understand the nature of the enemy, a devastating indictment of the Intelligence Community’s inability to define the jihadi threat. Inherent in the Chairman’s acknowledgement that the enemy “is different than any we have faced in the past,” is the implication that we need to reconsider how we determine what motivates and animates the enemy in order to clarify the jihadi threat. Confident in our ability to meet this challenge, General Pace affirmed that “there is no way we can lose if we maintain our patience and our…resolve. But it’s also true that inside of that patience and resolve, we should execute our mission as smartly as we possibly can.”

Continuing with his speech, General Pace suggested a simple starting point for improving our understanding and thereby our mission execution:

“I say you need to get out and read what our enemies have said. Remember Hitler. Remember he wrote Mein Kampf. He said in writing exactly what his plan was, and we collectively ignored that to our great detriment. Now, our enemies have said publicly on film, on the Internet, their goal is to destroy our way of life. No equivocation on their part. They’re not saying if you stay home, we will not come after you. They are saying their goal is to rid the Middle East of all foreigners. Then, overthrow all governments that are not friendly to them, which means every single one of those governments. Then, to use that base as a way to spread their terrorism and their oppression across the globe to include a map that shows 100 years from now that the entire globe will be under their domination.”

By singling out Mein Kampf as his example, General Pace focused on Hitler’s declared strategic doctrine, used by the Nazis as the foundation for their tactical employment of military, political, economic, and social instruments of power to establish the 1,000 year Reich.

Likewise, the nature of today’s jihadist enemies can only be understood within the context of their declared strategic doctrine to dominate the world. Just as we ignored Mein Kampf “to our great detriment” prior to World War II, so we are on the verge of suffering a similar fate today.

The reason the Intelligence Community is unable to define the nature of the jihadi enemy, the Chairman implies, is because we have not “read what the enemy has said.” In other words, we have failed to undertake an assessment of the threat based on the jihadi enemy’s declared strategic doctrine. This conclusion leads to three fundamental research questions:

A brief discussion of the research questions will be used to frame the hypothesis that Islamic law forms the doctrinal basis of the jihadi threat that can only be understood through an unconstrained review of the the Islamic law of jihad.

Read the rest of the thesis: To Our Great Detriment: Ignoring What Extremists Say About Jihad by Stephen Coughlin (pdf)