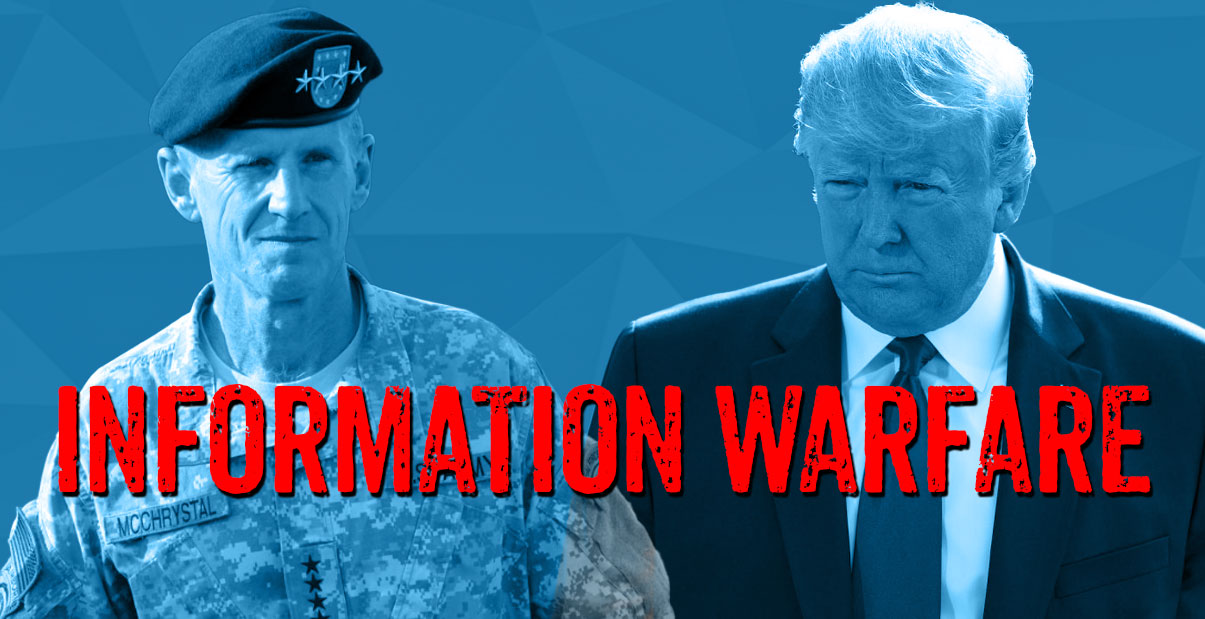 Unconstrained Analytics, Inc. seeks to develop public awareness that political warfare is a form of warfare.

It is in this context that we read that retired Special Operations General Stanley McChrystal will “deploy” information warfare technology in the domestic U.S. political arena even though, according to the Washington Post, this technology was “developed to counter Islamic State propaganda,” a real enemy. The general does this to “combat” a President’s communication efforts in a time of national crisis.

One of the goals of information warfare is the delegitimization of government leaders. Attacking a leader as he works through a difficult crisis is at the top of all insurgency manuals on actions taken to delegitimize a government.

McChrystal’s program brings current the unrelenting political warfare effort the domestic Left and deep state actors continue to wage against the American political system under the pretext of opposing President Trump while taking it to another level. In fact, he militarizes it.

While General McChrystal is experienced in countering information operations, he is best known for targeting individuals and networks.

In his tenure as the commanding general of Joint Special Operations Command, he developed the F3EAD Cycle – Find, Fix, Finish, Exploit, Analyze and Disseminate to hunt terrorists and their support networks. McChrystal will use this mentality to target President Trump and his network of supporters (“Trump’s unwavering digital army”), i.e., not enemies but large segments of the American population.

Defeat Disinfo accomplishes this through artificial intelligence (AI) and network analysis that maps President Trump’s statements to friendly discussion groups and the individuals who discuss them on social media. In Intelligence parlance, this is a collection effort—but this one is directed at American citizens and U.S. persons. President Trump is not al-Baghdadi and pro-Trump Americans are not ISIS cells.

Following is a brief top-level review of the Deep State and the Left’s efforts over the last several years:

On Russian collusion: The publicly revealed details of Crossfire Hurricane, and the framing of General Flynn, indicate that Democratic Party operatives and senior deep state actors waged a major information warfare campaign against a candidate, and then, later, against an elected president. This failing, the effort seamlessly transitioned to the desperate, half-baked Ukraine scandal, complete with Schiff’s sanctioned star-chamber hearings that featured phony whistleblowers whose information could not survive a hearsay challenge.

If everything the actual accuser alleged were true (after cross-examination), the president would only have been guilty of faithfully executing his Article II powers. The entire process was a parody of itself. Nevertheless, this second political warfare assault led to an impeachment proceeding that severely disrupted the president as the pandemic crisis was brewing.

Today, we have a president trying to manage a national health crisis while cocooned by virology and public health advisors that seem to have a higher calling.

As the COVID19 crisis unfolded, indicators have appeared that the crisis is being used and manipulated as a cover, and pretext, to undermine both our national security and the constitutional, civil, and economic rights of citizens.

In addition, America’s public health institutions appear to be organized to undermine national sovereignty through international entanglements. America’s mainstream and social media giants have designated the W.H.O. as the authority. They have become its enforcers.

This prompted Unconstrained Analytics’ to re-release “Narrative Dominance in COVID19 Reporting” and “Formation of a COVID19 Red Team” in early April.

When the theoretical model used to justify the draconian measures collapsed, and the shutdown continued, concerns were exponentially magnified. This lead to Unconstrained Analytics, Inc asking, in reference to The Bridge on the River Kwai, “Is President Trump Suffering from the ‘Col Nicholson Syndrome’?” As in, “Mr. Trump, candidate Trump demolished the very political class that President Trump keeps building bridges for, ‘what are you doing’?” Your base is being destroyed on your watch.”

This brings us back to the Left’s decision to transition to an open political warfare posture by using real information warfare capabilities to support its assault on a constitutional office because their candidate lost.

The warning in “Warning on Racism” is that the Left plans to use this year’s election cycle to achieve neo-Marxist objectives.

It turns out that the AI used to drive McChrystal’s Defeat Disinfo comes from “open-sourced technology incubated with funding from DARPA . . . to combat extremism overseas.” While DARPA pushed back on various claims, a powerful DARPA nexus to McChrystal’s effort remains.

Yaacov Apelbaum warned about the privatization of intelligence as far back as 2013.  In “On Privatizing Intelligence Gathering,” he asserted that information developed for the DoD to prosecute information warfare campaigns could later be used for domestic information operations. This raises the question: How is one to process articles like “Political Connections and Cronyism” in Vanity Fair if it turns out that Vanity Fair is a paid promoter of information warfare providers like Defeat Disinfo? After all, it’s not as if Vanity Fair didn’t carry the water for disinformation campaigns like the “Steele Dossier” in articles like “How Ex-Spy Christopher Steele Compiled His Explosive Trump-Russia Dossier,” or “Ex-Spy Behind the Trump-Russia Dossier Left a Clue for Mueller,” or “‘He Actually was the Paul Revere’: As the Steele Dossier’s Moment of Truth Arrives, Journalists Argue its Impact.” From a political warfare perspective, the question practically answers itself.

Right now, it is presumed that Defeat Disinfo is building its client base while identifying issues and targets—key Trump supporters, social media nodes, and influencers—for future synchronized exploitation as the election cycle heats up.

Significantly, Defeat Disinfo seeks to counter the president through “narratives.” Defeat Disinfo says it will “intervene” in President Trump’s official communications by “identifying the most popular counter-narratives and boosting them through a network of more than 3.4 million influencers across the country — in some cases paying users with large followings to take sides against the president.”

“Extremism,” it turns out, is whatever the state wants to target. “If you oppose us, you’re extreme. If you fight back, you’re a violent extremist.”

Both the American Left and the deep state believe that people who voted for Trump are extremists. Blue state governors believe that citizens who violate their pandemic related house arrests are extremists. Under the de-fluffed definition of extremism, they are. DHS made this clear back in 2009. West Point incorporated it in 2013. (Right-wing is anything that opposes the Left or that the Left dislikes.)

Both the “extremism” and “violent extremism” narratives integrate into politically correct memes as they weaponize to their countering hate speech platforms. People who engage in hate speech are extremists. Extremism is the predicate condition for becoming violent. It must be stopped. “Warning on Racism” lines this out.

The Left and the deep state keep the public focused on the circus that is the personal delegitimization of President Trump. At the same time, however, they are also delegitimizing constitutional processes, the Bill of Rights, and the rule of law. They want to turn citizens into subjects.

This is not overly raucous partisan politics.  It is the purposefully planned implosion of the American political process. Far-Left and deep state actors are at war with the Republic. But it is political warfare – which is a form of warfare.

Just read Unrestricted Warfare. After all, it is a Special Operations general running the show.

[i] Yaacov goes on to state:

“Time and time again, these von Wallenstein style wannabe spies have proven themselves to be a legal and an ethical liability. Case in point is that regardless of their patriotic pitch and public assertions of lofty ideals such as “solve the most important problems for the world’s most important institutions”, most of these individuals and companies are bottom feeders who are in it just for a fistful of dollars and narcissistic bragging rights. From the various e-mails disclosed, its obvious that they have no qualms conducting criminal influence operations against their customer’s political opponents and their families on US soil.

The complete lack of moral scruples from guns for hire, like Aaron Barr, who engaged in the worst type of for-pay defamation doesn’t seem to change with time. Barr—after scrubbing his on-line persona several times—resurfaces in 2015 as a progressive, environmentally friendly activist this time dedicated to promoting Russian collusion theories, climate change awareness, and bemoaning the loss of on-line privacy.”