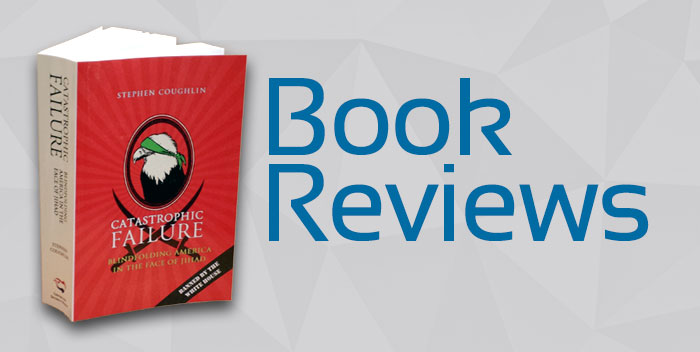 Edward Cline at the Center for the Advancement of Capitalism has written a multi-part review of Stephen Coughlin’s book, Catastrophic Failure: Blindfolding America in the Face of Jihad.

Catastrophic Failure: A Review, Part I
A single column review of Stephen Coughlin’s vitally important Catastrophic Failure: Blindfolding America in the Face of Jihad, would not do justice to the book. I can only highlight some of the important, interlinked and salient information presented by Coughlin. Therefore this review will run to two or more columns. Coughlin’s book is literally vital, as vital as the blood that courses through our veins. Catastrophic Failure brings to light everything we should know about Islam and its advocates’ determined campaign to conquer the West, and especially America, and impose Sharia law on the world – and everything our government has consistently refused to know or evaded to a degree that amounts to criminal negligence.

Reading the book was a daunting and, I don’t mind saying so, numbing task, numbing because what Coughlin reveals in it vis-à-vis what our government and the agencies, charged with protecting the country against terrorism and the designs of foreign powers, refuse or are fatally politically correct to learn, are not doing to fulfill their legal and Constitutional mandates.What Coughlin has assembled is a mountain of information about the perilous deficiencies of our “warfighting” policies and the “efficacy” of the Islamic Movement’s interlocking and integrated stratagems. . . .

Catastrophic Failure: A Review, Part II
The Muslim Brotherhood and the OIC do not stymie our politicians, the military, and intelligence agencies; they stymie themselves. The censorship is voluntary, not imposed. The enemy knows this. Our leadership does not, because it is immersed in a swamp of psychobabble and behavior babble and “violent extremism” babble. All the varieties of babble are meant to enable the leadership to defer knowledge of Islam, Sharia, and patronize the language games of the OIC and the Brotherhood. Rather than prosecute a genuine War on Terror, our leadership would rather wear a blindfold and play “Pin the tail on the donkey,” the donkey being anything but Islam. Islam, in their eyes, is a “religion of peace” that was and is still being “hijacked” by “radicals,” “extremists,” “lone wolves,” al-Qaeda, Boko Haram, al- Shabaab, and ISIS. It’s either that, or acts of terrorism have nothing to do with Islam. Stephen Coughlin, in Catastrophic Failure, torpedoes that whole perilous and near-treasonous mindset. They’re all cut from the same cloth, and that cloth is Sharia law. . . .

“The Absence of Facts” in the War on Terror
Except that any fashioner or overseer of military and civilian threat analysis could never swear to anything in a court of law or during a Congressional committee hearing, because he would invariably perjure himself. So he would hedge behind a well-rehearsed litany of presuppositions and assumptions. Continuing a column on “Our Ignorance” from Stephen Coughlin’s Catastrophic Failure: Blindfolding America in the Face of Jihad (pp. 443-484), from Institutionalized Ignorance of Islam, I will focus here on the rendering of language and words to meaninglessness by Army writing guides discussed by Stephen Coughlin in “Our Ignorance.” I thought a Socratic exposition of the subject would better drive home the point over a straight narrative. . . .

A Congressional Overture to Censorship
Stephen Coughlin alerted me to a House Resolution introduced on December 17th, H.Res.569, “Condemning violence, bigotry, and hateful rhetoric towards Muslims in the United States.114th Congress (2015-2016).” As of this writing, the country remains clueless about this development. . . Coughlin, in Parts IV through VI in Catastrophic Failure, reveals in detail the Muslim Brotherhood’s and the Organization of Islamic Cooperation’s (OIC) mutual and complementary obsession with having Islamophobia quashed and prohibited on pain of penalty, worldwide, but especially in the U.S. As Coughlin explains in great detail in his book, the language of the House resolution mirrors the OIC’s Islamophobia narrative being implemented domestically. . . .

Institutionalized Ignorance of Islam
Stephen Coughlin, in Part VIII, “Our Ignorance,” of Catastrophic Failure: (pp. 443-484), dwells on the depth and nature of our ignorance of our Islamic enemy. But suppose that ignorance is a consequence of a policy that favors the postmodern mantra that true, incontrovertible knowledge is impossible. . . .

Words and Reality
While reading Stephen Coughlin’s seminal and all-important Catastrophic Failure: Blindfolding America in the Face of Jihad, I frequently encountered quotations the author used to stress his many points that in terms of defending this country from Islamic incursions, or, rather, failing to defend it, the language of the defenders has been corrupted and rendered meaningless. The quotations came from Josef Pieper’s Abuse of Language, Abuse of Power (Mißbrauch der Sprache, Machtmißbrauch), first published in 1974. The quotations were so intriguing that I ordered the book, which is actually a 54-page pamphlet featuring two essays by Pieper, “Abuse of Language, Abuse of Power,” and “Knowledge and Freedom.” Coughlin remarked that Pieper’s book “underlies much in what I do.” . . . .